Irrigation powered by solar pays off

A combination of tariff management and a new solar energy system has seen Michael and Kay Gaffy’s farm energy bills reduce by over 70% during peak irrigation!

Michael and Kay Gaffy operate an irrigated hay-making business in Mooroopna.  With centre pivots running 24 hours during the summer peak, they saw their energy bills rise to just over $10,000 per month during summer.  Considering alternative energy to be a no brainer, Michael was pleased to hear about the Victorian Government’s energy grants program during an irrigation seminar presented by Agriculture Victoria’s Nick O’Halloran.

With Nick’s support, Michael looked into the program further and signed up for the first step involving a free energy assessment. Following the assessment, a plan and grant application were put together to instal solar panels on the roof of a large hay shed.  However, Michael then discovered a new solar tracking system at the Henty Field Days. Designed to ‘follow the sun’, the Sunflower Solar panels are mounted on two axes that can tilt the panels sideways, as well as back and forth. A computer program based on the sun’s daily and seasonal patterns drive the axes to tilt the panels in the sun’s direction. Michael was attracted to this system, producing more energy without needing more panels. 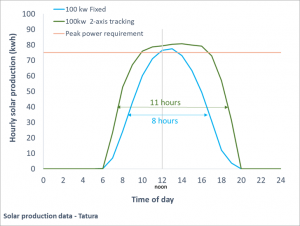 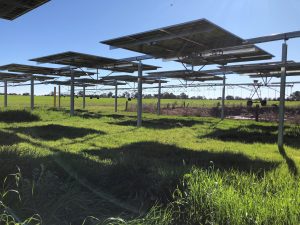 After much research, consultation and paperwork, the grant application was re-written and submitted. In addition, Michael put time into enquiring and negotiating the tariff rates.  “It’s a long and slow process” admits Michael “but it was worth it”.

Despite the pivots running as hard as usual this summer, the peak energy bills for 2021 averaged only $3,060 per month.

The build, which took one month, ran fairly smoothly although an ‘unexpected’ extra was the need to spend another $4,000 on a secure, high fence around the panels for safety. The solar panels have been in operation now for 8 months, and year-to-date figures show a 50% fall in energy drawn from the grid.

The innovative 100kW system cost $180,000 and is expected to last about 15 years.  After Renewable Energy Target (RET) certificates were sold, the net capital invested was $120,000. In case of extreme weather or other damage, the panels are included in the farm insurance.

The economics stack up, even if we work on the total costs of capital and exclude the grant:

Annual costs:      None yet, all upgrades and repairs so far have been covered by warranty.

Let’s assume some maintenance costs of $2,000 to occur every 5 years’.

Even if we discount future cashflows at 6% and assume some repairs ($2,000) in Year 5, the payback on the total cost of capital is 5.6 years. The ‘discounted payback’ calculation used in this story takes into account that capital could have earned interest if invested in something else; that money is worth more now than in the future. Hence, future benefits are worth less in today’s dollars. It’s a sort of ‘reverse interest calculation’. We also considered potential repairs and maintenance costs.

With a grant to support the purchase, Michael and Kay have a much faster payback plus the benefits of a secure and stable, clean energy source.

Michael and Kay Gaffy are an example of hundreds of farmers across Victoria who took up the Victorian Government’s free energy assessment and successfully applied for an Agriculture Energy Investment Plan grant.

This grant program has been extended and is open for applications until 15th December 2021 to Victorian farmers from all agricultural sectors.