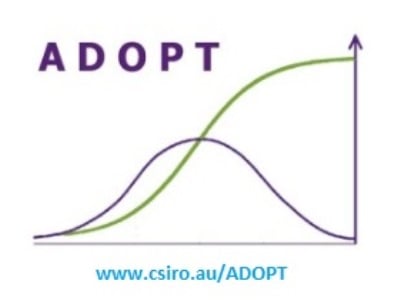 ADOPT has been designed to help evaluate and predict the likely level of adoption and spread of specific agricultural technologies and practices for particular target markets and where adoption will peak and the time it is most likely to. ADOPT is an MS Excel-based tool developed by CSIRO, the Victorian Department of Primary Industries, Department of Agriculture and Food Western Australia and the Future Farm Industries CRC. It is freely available on the Commonwealth Scientific and Industrial Research Organisation (CSIRO) website.  https://research.csiro.au/software/adopt/

Description
ADOPT assists those in agricultural research, development and extension (RD&E) to apply and understand factors likely to affect the adoptability of specific innovations for particular target markets.  It uses a structured set of questions based on a well-established understanding of the socio-economic factors influencing the adoption of agricultural innovations.
The tool is framed around four key aspects of adoption:
1.    The learning characteristics of the population
2.    The population characteristics that influence relative advantage
3.    The learnability of the actual advantage(s) of the innovation
4.    The relative advantage characteristics of the innovation

ADOPT has a set of 22 variables/factors that are empirically known to influence adoption. These are grouped under the four key areas and used as the basis for the framework. The reason behind its development is to provide a cost effective and effective tool to help develop adoption strategies based on the large body of research and understanding available.  The tool aims to help people to accelerate peak of adoption and increase the scale of adoption for particular innovations.

It is preferable to use it in a workshop setting.  It uses a series of 22 questions, which once answered generate an “adoption” report including sensitivity analysis.

To hear Rick Llewellyn from CSIRO present on the ADOPT model hosted by John James, click on the image below. 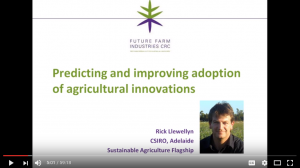 More information is available from https://research.csiro.au/software/adopt/   There are two versions of ADOPT, developed country and smallholder: