Edward De Bono developed the “Six Thinking Hats” as a simple, systematic, method of thinking; that can help individuals and groups be more focussed, efficient and effective with their thinking, collaboration and decision making.

The approach helps individuals and group members, view issues and challenges from different perspectives, which then assists them with their problem solving.

The more the “Thinking Hats” are used, the more it becomes part of a thinking culture.  It can save time that may otherwise be wasted in argument or drifting discussion.  It can help keep emotions and egos in check that may otherwise contribute to poor decision making, ineffective group processes or groups becoming dysfunctional.

It will help unlock creativity and it helps organise each group member’s thoughts and ideas, maximise their overall contribution and helps them collectively get to solutions with a shared vision more quickly.

It is described as a way of getting parallel thinking, which means that each person is looking and thinking in the same direction, but changes in theme as the hat changes.

“Creativity involves breaking out of established patterns in order to look at things in a different way.” – Edward De Bono

At first you might feel a little awkward using the different hats, but this awkwardness will soon pass as the convenience of the system becomes apparent.  The great value of the hats is that they provide thinking roles.  A person can take some comfort from play acting each of these roles, rather than any particular role becoming their identity within the group.

Without the formality of the “Hats” approach, some thinkers would remain permanently stuck in one mode (usually the black hat mode) and not contribute fully to the group.

“Creative thinking – in terms of idea creativity – is not a mystical talent.  It is a skill that can be practised and nurtured.” – Edward De Bono

Edward De Bono introduces his concept of the six hats in this short video, click on the image below. 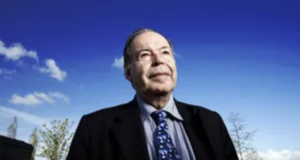 The approach is described fully in his book, Six Thinking Hats (1985).

A template for using the approach with a group is provided by the University of South Australia, here.

An important point is, that when using the approach with a group, each person needs to have the same “hat” on at the same time. 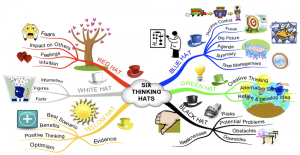 When wearing the white thinking hat, the thinker should imitate the computer.  White hat thinking is a discipline and a direction.   The thinker strives to be more neutral and more objective in the presentation of information.

The red hat allows the thinker to say how they feel about the matter.

The red hat provides a convenient method for a thinker to switch in and out of the ‘feeling’ mode, in a way that is not possible without such a device.

The red hat allows a thinker to explore the feelings of others by asking for a ‘red hat review’.  When a thinker is using the red hat there should never be any attempt to justify the feelings or to demand a logical basis for them.

Devil’s advocate, negative judgement, why it will not work.

The black hat thinker points out risks and dangers.  Black hat thinking may point out the errors in the thinking procedure and method itself.

The person who puts on the green hat is using creative thinking.

The search for alternatives is a fundamental aspect of green hat thinking.  There is a need to go beyond the known, the obvious and the satisfactory.

Provocation is an important part of green hat thinking.  A provocation is used to take us out of our usual patterns of thinking. There are many ways of setting up provocations, including the random word method.

The blue hat thinker calls for the use of the other hats.

Blue hat thinking is responsible for summaries, overviews and conclusions.

Even when the specific blue hat thinking role is assigned to one person; it is still open to anyone to offer blue hat comments and suggestions.

At this point, it’s time for a yellow hat remark: “Try it out for yourself.”