Everett M. Rogers is considered a founder of the Diffusion of Innovations theory.  Rogers undertook a PhD (doctoral dissertation) in 1957 analysing the diffusion of several agricultural innovations in a rural community in Iowa.  Rogers was convinced that the adoption of innovations follows a universal process of social change.  It originated in communications to explain how, over time, an idea or product gains momentum and spreads (or diffuses, hence the name) through a specific population or social system. 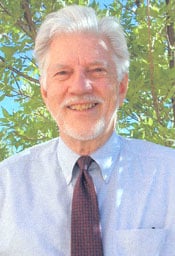 There are four main interacting elements of the key concept:  Diffusion of Innovations – 1) an innovation, 2) communicated through certain channels, 3) over time and 4) among members of a social system.

The implication of adopting the theory is that extension professionals/practitioners need to develop different practices/messages for different ‘types’ of adopters (i.e. farmer segmentation).

There are five main characteristics of innovations that determine how an innovation will be responded to by a potential farmer/end-user:

Rogers proposed a set of stages in decision-making in adopting an innovation:
•    Knowledge
•    Persuasion
•    Decision (adoption or rejection)
•    Implementation
•    Confirmation 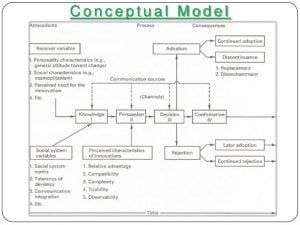 Application of the Theory
The theory has been used in rural sociology/agricultural extension and also in disciplines such as anthropology, public health and general sociology.

Many governments of developing economies have used the Diffusion of Innovations theory to shape the conceptual framework and implementation design of international rural development programs.

For our article giving case studies and discussion on the use of the theory, please click here.

Critique of the Theory

Publicised criticisms of the theory started to appear in the 1970s in the context of international development projects (Rogers, 2003).  The key criticism was that innovations were being targeted to the “Innovators” and “Early Adopters” – the more ‘progressive’ farmers, with the expectation that innovative practices would trickle down to the majority of farmers.

However, the reality was that the application of the theory was viewed as a source of inequity, dividing rural communities and not benefitting/assisting those in most need. This was particularly noticeable when the diffusion of innovations process benefited larger farmers by increasing their production but decreasing the market prices/farm gate returns received by all farmers in the region (including the non-adopters) (http://opendocs.ids.ac.uk/opendocs/handle/123456789/602#.VuEUoUYutAM; Goss, 1979).

For a great opportunity to hear Everett Rogers speak on the Diffusion of Innovations, watch the ProBusiness Video and Schreiner Productions, Salt Lake City, Utah YouTube Video below.

To see an explaination of the Diffusion of Innovations, by Prof Michael Rosemann of Queensland University of Technology 101 see the YouTube Video, https://www.youtube.com/watch?v=kxVeLlTEgtU  Published February 11th 2015