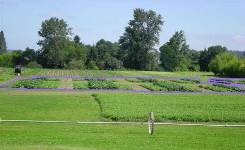 (Remenyi, and the Australian Centre for International Agricultural Research, 1985)

The FSR approach is to connect the farmer with the researcher.

The primary objective is to improve the well-being of individual farming families by increasing on-farm productivity, given the constraints imposed by resources and the environment. Improving productivity is based on the development and dissemination of relevant improved technologies, as well as:

This recognises that inappropriate technologies and policies that are incompatible with local conditions (biophysical, social and economic) have been major barriers to farmers adopting R&D outputs and changing farm practices.

It is a whole-farm systems approach, where if a sub-system is the focus of the research, there needs to be recognition of how this sub-system connects to the wider farm system (i.e. it is about the interactions between system components).

General characteristics
In practice there are no clear boundaries between the stages of the approach (e.g. design activities may emerge during the testing stage as promising alternatives develop). This is a strength of the FSR approach because it incorporates adaptive on-farm testing to become inputs to further testing on an experiment station. This develops appropriate innovations that will assist in sustaining the livelihoods of farming families.

FSR process is recognised as dynamic and iterative with linkages in both directions between farmers, researchers and funding agencies. However, the farming family is at the centre of the FSR project.

Hawkesbury FSR model (Bawden et al., 1985))
In acknowledgement of the reductionist nature of agricultural science and the limitations of management science with its focus on optimising productivity, the authors argue for a FSR approach that encompasses the interactive nature of doing agriculture – placing the farmer within both a natural and social environment: a social-ecological systems approach.

To locate the soft systems approach in relation to other FSR approaches, the authors have developed a hierarchy of methodologies, ranging from reductionist to holistic depending on need, situation or stage of the research process. 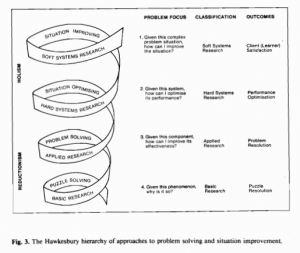 A soft systems approach is compatible with the Hawkesbury approach, as it allows for informed debate about the problem and change desired with the farmers. This is an integral part of the problem solving process as a social learning process.

In the Hawkesbury approach, learning is the key element of the FSR process. It is:

The starting point of the Hawkesbury approach is when the researcher joins an individual or group who are concerned about their situation.  The situation is likely to involve a collection of problems rather than a single issue.

The model of influences on the development of systems approaches to problem-solving in agriculture has five main approaches, ranging from ‘soft’ systems to ‘hard’ systems: 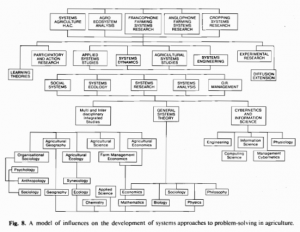 While all five approaches have much in common and are complementary (they all focus on multidisciplinary studies and have commitment to systems thinking and practice), the authors distinguish that the systems’ movement performs more than an integrative function – it also involves a major shift in understanding how we think and learn as both emergent and hierarchical, involving communication, interaction and control.

FSR in the Australian context – Remenyi and Coxhead, Simmonds (1984) – has identified three basic types of FSR:

Australian FSR practice has tended to focus on NFS as compared with the FSR/OFR that is considered more relevant to the situation of subsistence farmers.

Collinson, M. (2000) A history of farming systems research. Wallingford, UK.  Food and Agriculture Organisation of the United Nations/Centre for Agriculture and Biosciences International>http://trove.nla.gov.au/work/16047516?versionId=46557113