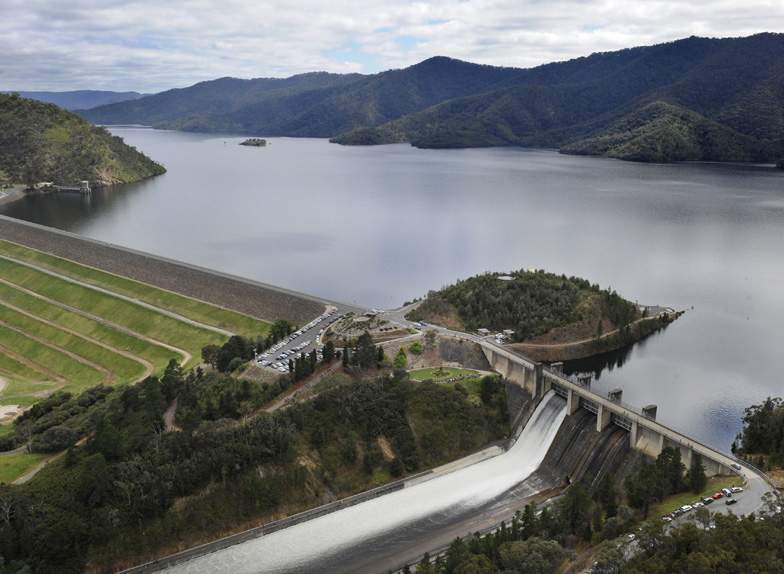 This aim of this service is to reduce some of the uncertainty about upcoming irrigation water availability in the connected sMDB and to assist with earlier and more informed farm management decision making.

This is the final ‘Upcoming irrigation water availability update’ for 2021.  Whether or not this service resumes in 2022 will depend on your feedback.  A big THANK YOU for your participation and support of this pilot!

2.  RECENT RAINFALL and where it fell relative to major storages

Rainfall recorded over the last 7 days, to 9am Thursday 28th October.

Rainfall over the last 7 days is also shown in the BoM rainfall map below.

Jingellic – on the Murray River above Hume Dam, but below Snowy Hydro.

McCallums – on the Tallangatta Creek, above Hume Dam.

Hinnomunjie – on the Mitta Mitta River, above Lake Dartmouth.

Gibbo Park – on the Gibbo River, above Lake Dartmouth.

Doherty’s – on the Goulburn River, above Lake Eildon.

Jamieson – on the Big River, above Lake Eildon.

Glen Esk – on the Howqua River, above Lake Eildon.

Devlins Bridge – on the Yea River, below Lake Eildon.

The MDBA graph below shows the total Murray system ‘5-day rolling average’ daily inflows continued to recede to rates just below the October long-term average in the 7-day period leading up to 20th October.

Streamflow data for the Broken, Campaspe, Loddon and Bullarook systems is also available on the GMW and BoM websites.

The Bom upper Murray root zone soil moisture graph below uses modelled data and shows that the upper Murray catchment is drying out.

The BoM released their climate outlook today.  The map below shows a 65 – 70% chance of exceeding median rainfall in November to January for most of the GMID and associated upper catchments.

The BoM released their climate driver update earlier this week.  The LaNina alert continues, with about a 70% likelihood of a LaNina developing.  Most international climate models surveyed by the BoM indicate weak La Niña conditions are likely for the coming months. La Niña events increase the chances of above-average rainfall for eastern Australia during spring and summer.

The Indian Ocean Dipole (IOD) remains in a negative phase.  Models suggest the IOD will return to neutral levels in late spring or early summer.  A negative IOD increases the chances of above-average spring rainfall for much of southern and eastern Australia.

The Southern Annular Mode (SAM) index returned to positive levels over the past week. It is forecast to remain generally at positive levels to the end of the year.  A positive SAM during spring typically brings wetter weather to eastern parts of Australia.

There are a few factors that need to be considered in answering the above question about whether allocations will be made against Low Reliability Water Shares this season, or not – mainly relating to the Vic Murray and Goulburn systems:

How water is allocated on the Vic Murray and Goulburn systems.

For an update on recent Hume Dam operations watch this 2-minute MDBA Hume Dam Operations Video Update (updated yesterday, Wednesday).  The volume being released from Hume Dam (14 GL/day) is now greater than the flow rate into the dam (13 GL/day).  Water is being released to meet irrigation orders and downstream environmental targets.

Supplementary water access for the NSW Murray Valley:  Unregulated flows have ceased in the upper reaches of the Murray (Hume Dam to Barmah), whilst most reaches downstream have been extended to 2nd November.  Inflows from Murray tributaries in the Ovens, Kiewa and Goulburn River have continued to recede.

Supplementary water access in the Murrumbidgee River has been approved.  System demand is increasing and unregulated flows will cease in the upper reaches while downstream reaches have been extended (to 29th October).  Releases from Burrinjuck Dam have reduced and inflows from the tributaries are also receding.

11.  DELIVERY RISKS IN THE MURRAY SYSTEM

A report titled “Managing Delivery Risks in the River Murray System – What We Heard” was released earlier this week by DELWP.  The report captures feedback form Victorian stakeholders related to delivery risk and the next steps for the Victorian Government.  The difference between a one-week weather forecast and three-to-four-week travel times from the storages to water users below the Barmah Choke, means a shortfall risk will always exist.  Unfortunately, the delivery risk is likely to increase as the capacity of the Choke continues to decrease.

The graph below shows how the Active Storage volume has changed over the years, how it is shared between States and that the current volume is as high as it’s been since September 2013.

Recent rainfall.  Map.  Rainfall for the past day, week or months.  BoM

Rainfall since 9am.  Updated every half hour.  For select locations.  Rainfall (temperaturre and wind) shown on map as coloured text.  Click on “weather observations” (bottom right of screen).  Double click on the weather station (location) on the map for more details.  “Rain radar” web site.  BoM

Forecast rainfall.  Map.  For next 4-day or 8-day period, or for any particular day over the next 5 days.  BoM

MDBA Weekly River Murray Report.  Provides a weekly review of rainfall and lots of other important updates for the connected southern MDB

Murray system.  MDBA Weekly Report.  Inflow graphs are at the back of the report.  Compares recent inflows with long-term averages.  Weekly streamflow response commentary is also provided at the front of the report

MDBA Weekly River Murray Update.  Summary of current water allocations for different vallies in the sMDB, usually on the last page of the report

NSW.  Includes NSW Murray and Murrumbidgee.  The water outlook is included in the relevant Water Allocation Statements, usually on the back page of the report.  DPIE

Chance of at least (rainfall).  Map showing probabilities of receiving a specified amount of rain for next week, fortnight, month or 3-month period.  BoM

The Fast Break.  A farmer-oriented update of seasonal climate drivers and outlooks, including a summary of rainfall predictions for the next 3 months from 12 different climate models.  AgVic

Climate driver tool.  Interactive tool that enables you to explore how rainfall at your selected location has been influenced by different climate driver phases, in the past.  The tool also provides analysis of long-term rainfall records.  AgVic, GRDC and SARDI

MDBA River Murray Weekly Report (produced on Fridays):
– Graph showing ‘MDB Active Storage’, recent and over the last 20 years.  This graph only appears monthly, usually in the first week of the month
– A summary of storage volumes and weekly volume changes for southern MDB storages are given in tables (usually on about page 3)

Northern Vic Resource Manager.  Provides a breakdown of volumes currently available in allocation accounts, new allocation volumes in the current season, volumes carried over into the season, volumes in spillable accounts and net trade – for each irrigation district and for private, environmental and Water Corp holdings

Murray storages.  Click on the storage (eg. Hume Dam) to get ‘percent full’ and current storage volumes.  This site is regularly updated.  MDBA

NSW.  Carryover percentages for NSW Murray and Murrumbidgee systems are usually included in the Water Allocation Statements (usually in a table on page 1).  DPIE

River Murray flow and use in SA.  Shows river flow into SA and a break-down of water use.  Updated quraterly.  SA Dept of Env and Water

MDBA Storages.  Displays the shares of the MDBA “Active Storages” (Lakes Hume, Dartmouth, Menindee and Victoria) for Vic, NSW and SA.  This site also shows the relative “air space” for each share (Vic, NSW & SA).  Scroll to the bottom of the page and click on the PDF for the latest update. MDBA

MDBA River Murray System Annual Operating Outlooks. Outlines potential forward scenarios of IVT delivery for the irrigation season ahead – which can be useful if you want to gain a better understanding of how much water may be traded out of different valleys in the remainder of the season

This publication is provided solely for information purposes and no representation or warranty is made as to its quality, accuracy, completeness, suitability or fitness for any particular purpose. You should make your own inquiries as to its appropriateness and suitability for your particular circumstances.  The State of Victoria as represented by its Department of Jobs, Precincts and Regions accepts no duty of care and disclaims all liability in relation to use of this publication.

Information in these updates is provided to assist irrigators make more informed and earlier farm maangement decisions related to upcoming irrigation water availability.  The information is NOT intended to assist with financial decision making related to water investment or water trade.

Please note, this service is a pilot.  The Department of Jobs, Precints and Regions has NOT developed a high level of experience in delivering this service, so there is an increased risk to users.  Due to a need for the release of timely information, this report is not subject to rigorous checking and approval procedures.  Figures provided in this report are entered manually and are subject to error.  Information in this report needs to be checked with other sources.