The latest Dairy Farm Monitor report shows that the 25 farmers in the Gippsland sample used a range of operational strategies to manage the 2019-20 season. Surveyed farmers made the decision early to plan for the challenging season ahead with contrasting conditions in the sub regions.

The seasonal conditions in Gippsland started out as challenging in 2019-20. Eastern areas of the region remained in drought and the irrigation area opened with low water allocations. Surveyed farmers in these regions made the early decision to plan for low water allocations and dry conditions by securing purchased feed and drawing on their fodder reserves. Conversely it was considerably wetter in south and west Gippsland for the same period providing challenges for fodder conservation. Conditions improved considerably across most of Gippsland from January to be one of the best growing seasons for many years with multiple fodder conservation opportunities and good pasture availability.

On average, farms in Gippsland maintained the same average herd size but increased per cow (and per hectare) milk production from increased homegrown feed availability, with a significant increase in conserved fodder.

Gippsland had a three hundred per cent increase in profit performance

Despite the tough operating conditions in Gippsland for the first six months of 2019-20, average Earnings Before Interest and Tax (EBIT) increased to $2.07 per kilogram milk solids (kg MS), a 300% improvement from 51 cents/kg MS in 2018-19. This was supported by the improved growing conditions which allowed harvesting of excess fodder, a greater reliance on homegrown forage and improved milk production per cow and per farm. A reduction in the cost for imported feeds and improved milk price also contributed to the improved profitability of surveyed farms in 2019-20.

Surveyed Gippsland farms returned a 6.6 per cent return on total assets as seen in the figure below. It was a case of a number of things going right, especially in the second half of the year, combined with commendable management skills to enable this to happen. This highlighted the delicate balance of income streams, costs and timely tactical decision making for the businesses in the sample. 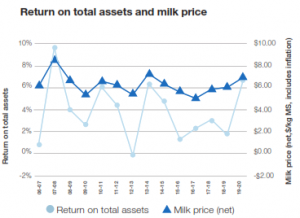 Farm incomes were boosted by a 16 per cent increase in milk price to $6.95/kg MS. Although the actual percentage increase was in line with the rest of the state this was still 20 cents/kg MS less than the state average, as seen in previous years. A buoyant livestock market lifted prices received for livestock sales further improved farm incomes. Average livestock trading profit increased by 32 per cent to 61 cents/kg MS.

Average costs decreased for participant farms in 2019-20. At the end of the year, three-quarters of the surveyed farms had greater feed on hand than at the start, reflecting the improved growing conditions, particularly in the second half of 2019-20. On average, surveyed farmers fed 4 per cent less purchased feed per cow. This reduced their reliance on purchased feed which was at a lower price per tonne. This translated to 30 per cent decrease in purchased feed costs (as lower quantities were fed and easing price of feed).

Grazed pasture is a large component of surveyed Gippsland farmers, with all but three farms sourcing more than half the diet from pasture (see figure below). However, the top performing farms shown by the darker shading indicate that feed source is not an indicator of profitability. 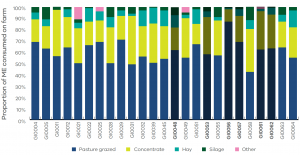 Most importantly, it was the careful management and planning by irrigators in 2019-20 that allowed for accelerated production in the second half of the season, helping mitigate the slow start. With careful planning, came vigilant cost control and the ability to react quickly to changing economic and seasonal signals.

On average, sampled Gippsland farmers  were able to return a much-improved position from the previous year (2018-19) by capitalising on the lower cost operating systems and improved market conditions.

The Dairy Farm Monitor Project is a comprehensive annual survey of 80 Victorian dairy farm businesses which is relied on by the Victorian Government and industry decision-makers. This project provides objective financial and production information to identify the links between farm inputs and costs, particularly for water and feed planning decisions required for sustaining farm profitability.

The Dairy Farm Monitor Project is funded by Agriculture Victoria and Dairy Australia.