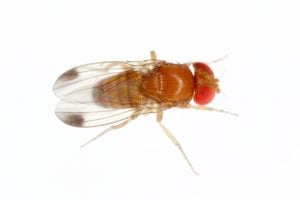 When the spotted wing drosophila lays its eggs in ripening fruit, the larvae feed on the fruit pulp as they grow. This makes the fruit unmarketable for growers, and inedible for home gardeners.

To spot one, look out for something similar in size and appearance to the common vinegar fly (Drosophila melanogaster). The adult flies are 2-3 mm long, yellow-brown in colour, with dark abdominal bands and red eyes. However only the males have spots on the ends of their wings that give the spotted wing drosophila its name. 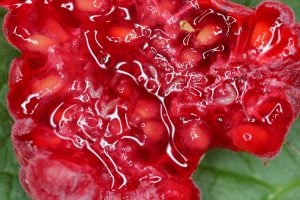 The SWD is currently not in Australia and we’d like to keep it that way. The SWD hails from southeast Asia and, after being found outside of its native range, has rapidly spread throughout Europe, the US and parts of South America. The impact on fruit through egg laying and feeding, and the ease with which this fly can spread to new areas makes it a priority exotic plant pest for Australia. Much of the eastern seaboard and south western region of Australia have ideal climates and host availability for this pest, so it’s important for all of us to keep an eye out for this “berry monster”.

So how has the SWD travelled so far and wide? Well it moves small distances through flight, but more importantly, with the larvae hidden away in fruit, long range spread of this pest occurs through movement of fruit produce around the world. 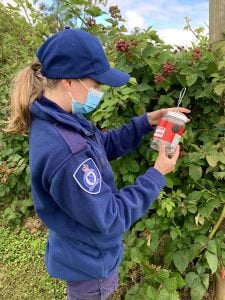 From December 2020 – January 2021, Agriculture Victoria’s Biosecurity Officers have worked with Berries Australia and berry growers in the Yarra Valley to set and monitor sticky traps and SWD lure traps that specifically attract and capture SWD should they attempt to sneak past our borders.

Angela Atkinson, Industry Development Officer for Berries Australia had this to say of the work:
“Spotted wing Drosophila (SWD) is the number one exotic pest threat to the Australian berry industry. By collaborating with Agriculture Victoria to develop SWD surveillance protocols on our berry farms, and peri-urban areas, we are increasing the chances of early detection and eradication should an incursion of this pest occur”. 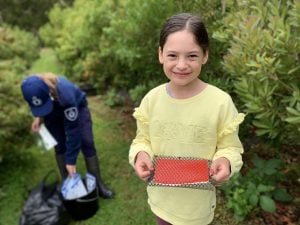 Even kids can get involved in helping look out for SWD

The Melbourne peri-urban food bowl produces a staggering 78% of Victoria’s strawberry supply. Therefore, monitoring for SWD in this region plays an important part of maintaining a supply of fresh, delicious strawberries to Melbourne and throughout the state.

Urban gardeners can help out too, by looking out for any deformed berries in their berry plants, or evidence of damage to ripening fruit and reporting anything unusual by uploading a photo to the MyPestGuide Reporter app or website and calling the Exotic Pest Plant Hotline on 1800 084 881.

A couple of fun case study videos by Cesar Australia – Part 1 and Part 2.

Don’t forget to check out our Pest Warrior comic and fill in our Target Pest Activity Book.