Foliar diseases, such as red leather leaf and bacterial blight, are common in grain and hay oat crops in Victoria. Both can cause yield and quality losses during favourable seasons. Surveys have found red leather leaf (Fig. 1.) (caused by the fungus Spermospora avenae) to be most severe in the medium and high rainfall zones, especially following cool, wet conditions. Bacterial blight (Fig. 2) (caused by the bacteria Pseudomonas syringae) has been found to be common in all oat growing regions, including low rainfall zones. 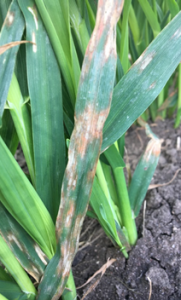 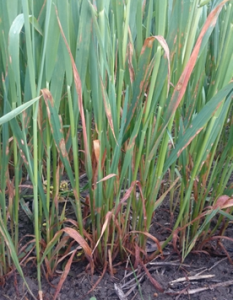 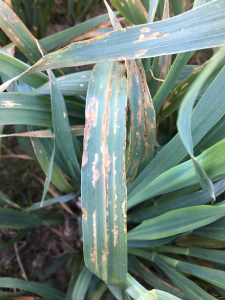 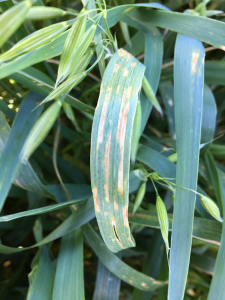 Field experiments found red leather leaf caused up to 0.7 t/ha (16%) grain yield loss and up to 1.0 t/ha (12%) loss in biomass in hay crops, with greater losses likely in seasons highly favorable for disease. Losses due to bacterial blight have not been studied.

Foliar fungicides are not registered for red leather leaf, however there are products that are registered for other diseases in oats which are effective in suppressing red leather leaf. These products must be used according to label directions, withholding periods (WHPs), and meet the relevant maximum residue limit (MRL) standards for both harvesting and grazing. Studies have shown that foliar fungicides were most effective when applied at mid tillering (Z25) and early stem elongation (Z31). However, they did not provide complete control.

Oats are commonly grown throughout south-eastern Australia to produce grain for human consumption and as stock feed (grain, grazing, and hay production). The demand for milling grade oats and fodder has recently increased, providing opportunity for improved returns to growers through disease management. Agriculture Victoria, in collaboration with the Department of Primary Industries and Regional Development (DPIRD) in Western Australia, are investigating the distribution and importance of foliar diseases of oats and strategies for their management. Target diseases are Red leather leaf (caused by the fungus Spermospora avenae) and Septoria blotch (caused by the fungus Parastagonospora avenaria f.sp. avenaria). This work is through investment from the Agrifutures “National oaten hay agronomy” and the Grains Research and Development Corporation’s “Integrated disease management strategies for southern region cereal and pulse growers” projects.

Surveys found that red leather leaf and bacterial blight were the most common foliar diseases of oats in south-eastern Australia during 2018 and 2019. Both diseases were found in the majority of crops. The severity of each disease varied depending on the variety grown and local seasonal conditions. Red leather leaf severity was greatest in susceptible varieties, in the medium and high rainfall zones. Septoria blotch and ring spot were found to be uncommon and at low levels, and don’t appear to be as important in south-eastern Australia. Bacterial blight had a low severity in all rainfall zones.

Field experiments conducted during 2018 and 2019 showed that red leather leaf severity was greatest in susceptible rated varieties and significantly less in moderately resistant varieties. Growers can get variety ratings from the Victorian 2020 Cereal Disease Guide. Red leather leaf caused up-to 0.7 t/ha (16%) grain yield in milling varieties and up to 1.0 t/ha (12%) biomass loss in hay varieties. This demonstrated that management of red leather leaf can have economic benefits in susceptible rated varieties during favourable seasons. Both of these seasons had below-average rainfall, especially during the spring months, so losses are likely to be greater during seasons with greater rainfall.

Foliar fungicides are not registered for red leather leaf, however there are products that are registered for other diseases in oats and can be used, providing the label directions are followed and relevant maximum residue limit (MRL) standards are observed. Our research has demonstrated that foliar fungicide application was most effective in suppressing red leather leaf when applied at mid tillering (Z25) and early stem elongation (Z31). The most effective strategy combined both Z25 and Z31 applications which reduced infection by 5-10%. This strategy is most effective as it coincides with early disease development. Fungicides did not provide total control, showing that they can be used as a tool to help manage red leather leaf but should not be relied on.

Red leather leaf is carried over from one season to the next on infected stubble. It is important to allow stubble to break down for 2-3 years before re-sowing oats as this significantly reduces the risk of disease development. Red leather leaf can also be carried over on seed, so infection can occur in paddocks with no history of oats.

Red leather leaf should be managed using an integrated approach that incorporates, paddock selection, variety selection, monitoring and timely fungicide application if necessary, to reduce the risk of loss.

The authors thank the Grains Research and Development Corporation (GRDC), Agrifutures and Agriculture Victoria for investment and support for this research