Exotic pests and diseases are those not yet found in Victoria and if they do gain entry, will pose a significant threat to Victoria’s cropping industry, valued at over $1.8 billion (ABARES 2014-2015). Many will also prevent access to our important overseas markets. Preventing pests and diseases from gaining a foothold, and quickly identifying and eradicating localised outbreaks is critical to protecting Victoria’s grain industry.

Agriculture Victoria’s CropSafe program is a critical tool in identifying potential exotic pests and disease threats to Victoria’s grain industry. The CropSafe program is a collaboration with a number of major agribusiness companies from across Victoria, incorporating approximately 80 per cent of Victoria’s agronomists. CropSafe has a network of over 200 experienced agronomists continually looking for new pests and diseases. This means Victorian grain growers can be far more confident that their crops are free of exotic pests.

Khapra beetle can cause losses of up to 75 per cent from direct feeding. Infested grain also becomes contaminated with beetles, cast skins and hairs from larvae, which can be a health risk and are difficult to remove from grain storage structure and transport vessels. 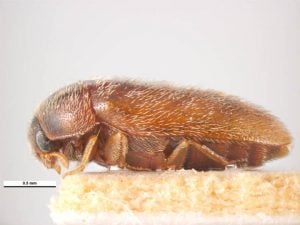 Karnal bunt causes wheat grains to develop dark discoloration at the pedicel or ‘embryo’ end of the grain. The discolouration progresses along the grain until it is entirely discoloured. The infection is difficult to detect on the plant. Infected grain has a distinct fishy smell, making it unacceptable for human consumption. Symptoms on the grain may be confused with black point, a physiological disorder common after wet conditions at harvest. Grain discolouration may also be caused by other fungi, so samples should be sent to a laboratory. 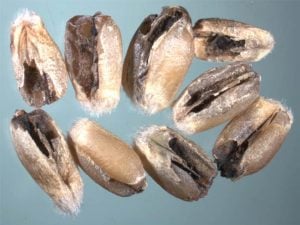 Symptoms are the same as other wheat stem rust pathotypes, elliptical blisters on the stems and leaves running parallel to the long axis. These blisters break open after a couple of days to reveal a mass of rust-coloured spores. 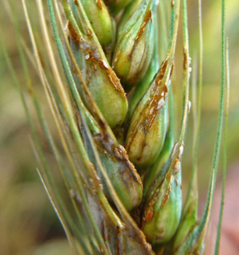 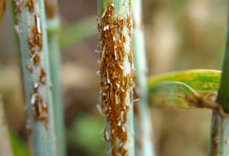 Lupin seedlings can develop lesions on the hypocotyl or cotyledons. Stem lesions are very distinctive and are oval-shaped up to 2cm long and contain pink to orange spore masses. These cause the stem to collapse on one side and bend to produce a ‘shepherd’s crook’ symptom. Further rainfall will allow infection progress to infect pods and seeds. Symptoms are most noticeable during flowering. Lupin branches die back in mature plants, eventually causing their death. 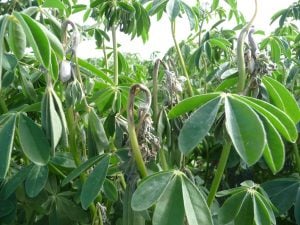 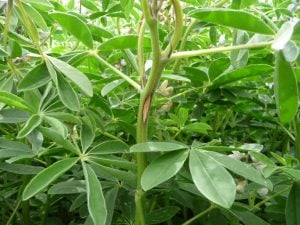 Feeding damage on cereal plants from Mayetiola hordei can cause leaf discolouration, from a darker green to bluish-green or slowing of new growth in seedlings. Plants are often stunted, and tillers can become weakened, causing plants to lodge. The main identifying feature of Barley stem gall midge is the formation of pea-sized galls (swellings of the plant tissue) at the base of the host plant between the leaf sheath and stem. 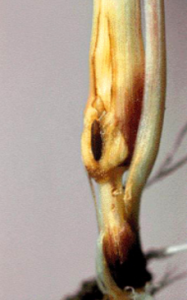 The white larva and the dark brown pupa of the Barley stem gall midge.
Source: ICARDA

Victorian guide to exotic pests and diseases of grain crops