TuYV has a wide host range and can infect canola, forage brassica and pulses including chickpea, field pea, lentil, faba bean, lupin and vetch. It can also infect a range of weed and pasture hosts such as marshmallow, musk weed, medics and clovers.

TuYV is transmitted from infected to healthy plants by a range of aphid species. The aphids acquire the virus when feeding on infected plants and then transmit the virus to healthy plants. Green peach aphid (Myzus persicae) is the most important vector of TuYV in Australia. TuYV is not seed-borne.

What to look for

In canola and forage brassica, TuYV infection can cause a variety of symptoms such as plant stunting, purpling or reddening of lower leaves (particularly on leaf edges) and interveinal chlorosis (Figures 1a & 1b and 2). Leaves of infected plants may be thicker and more leathery, yellow and/or brittle. 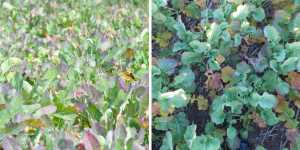 Figure 1a & 1b. Symptoms of early TuYV infection in canola 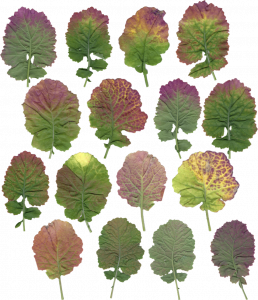 Figure 2. A variety of symptoms of TuYV infection on canola leaves – symptoms on the upper side of the leaf may be different to those on the lower side.

In pulses, symptoms of TuYV can vary with crop type and can include yellowing of leaves or whole plants and stunting in field peas (Figure 3), kabuli chickpeas (Figure 4), lentils (Figure 5) and faba beans, purple or red leaf discoloration in desi chickpeas (Figure 6) and tip necrosis in lupins. 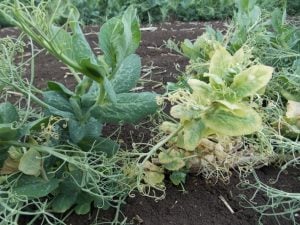 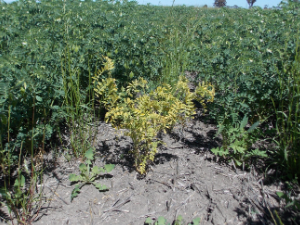 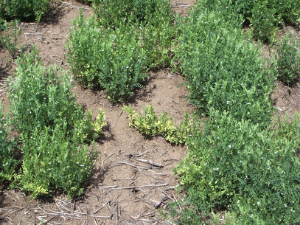 Figure 5. Symptoms (yellowing and stunting) of TuYV infection in lentil. 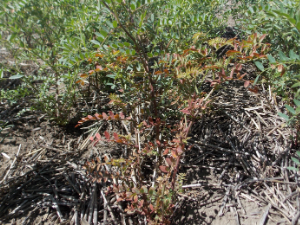 The typical symptoms of TuYV infection mentioned above are not always observed in some varieties of canola and pulses (Figure 7), yet non-symptomatic infection confirmed by virus testing has been found to still cause significant yield loss.

The presence of aphids in a crop can be a warning to be on the look-out for virus symptoms.

Figure 7. Despite the absence of typical symptoms of TuYV infection in plots inoculated with the virus, TuYV infection reduced yields by 40% in field peas (left) and 43% in lentils (right) in field trials in Victoria during 2019. The presence of TuYV in inoculated plots was confirmed by virus testing.

TuYV and its aphid vectors require suitable hosts, such as weeds, forage brassica and volunteer plants or crops, to survive between seasons. Infective aphids can then move from these hosts into crops, transmitting the virus to plants within the crop. Once an aphid has acquired the virus by feeding on an infected plant, it can potentially remain infective throughout its life.

Along with several other factors, environmental conditions play an important role in TuYV epidemics; outbreaks are more likely to occur when there is a green bridge between seasons and when aphids are present early in the season. The risk of infection also increases when crops are sown near paddocks that host large aphid populations or where the virus is already present. TuYV is commonly found in western Victoria and incidences within crops can be high. Once a plant is infected with a virus, it cannot be cured so prevention and management are vital.

Conditions in the Wimmera region in 2020 were favourable for TuYV infection. Along with the presence of weeds and volunteer plants that emerged following late summer and early autumn rains, aphids were active early in the season and TuYV was detected in the Horsham region early in the season. Growers and agronomists were urged to regularly monitor canola and pulse crops for aphids and virus symptoms.

Thank you to Joop Van Leur (NSW DPI, Senior Plant Pathologist) for his contribution and expertise.