Keep a lookout for the spotted lanternfly

The spotted lanternfly (Lycorma delicatula) is a high priority plant pest of Australia’s tree fruit, forestry and nursery industries and has the potential to harm our natural environment. It feeds on a variety of tree species including apple, stone fruit, grapes, walnut and a range of ornamental species.

Importantly, tree of heaven (Ailanthus altissima), a preferred host of spotted lanternfly, is established in Australia. It is commonly used in garden landscaping and streetscaping, particularly in urban areas. So, in the event of an incursion it would act as a green bridge and support spotted lanternfly establishment. 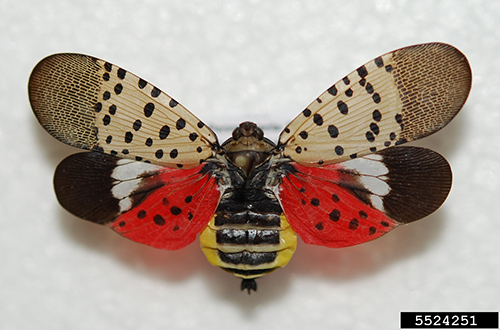 Have you seen tree of heaven?

Participate in the tree of heaven blitz this November to help map this important host of spotted lanternfly. Find out more here.

In the US, where spotted lanternfly is a recent arrival, this species is rapidly spreading throughout the eastern coastal states. Tracking its spread has been aided by both the striking visual appearance of this insect and contributions from citizen scientists.

A detection of this species in Australia would activate a formal process for considering if eradication is possible and feasible. Early detection makes the chance of eradication higher. That’s why we want your help keeping a lookout for this pest.

Understanding how to detect the spotted lanternfly at all life stages can be simple to learn and can go a long way towards protecting Australian production industries and the natural environment.

Like many insects, the spotted lanternfly lifecycle involves several distinct stages: egg, nymph and adult. We call this a ‘hemimetabolous’ lifecycle, where growth to the adult stage does not involve development through a pupal (cacoon) stage as you would see in moths and butterflies. Instead, the nymph undergoes a series of moults, growing larger and gaining more distinctive features each time, until it has all the features of an adult. 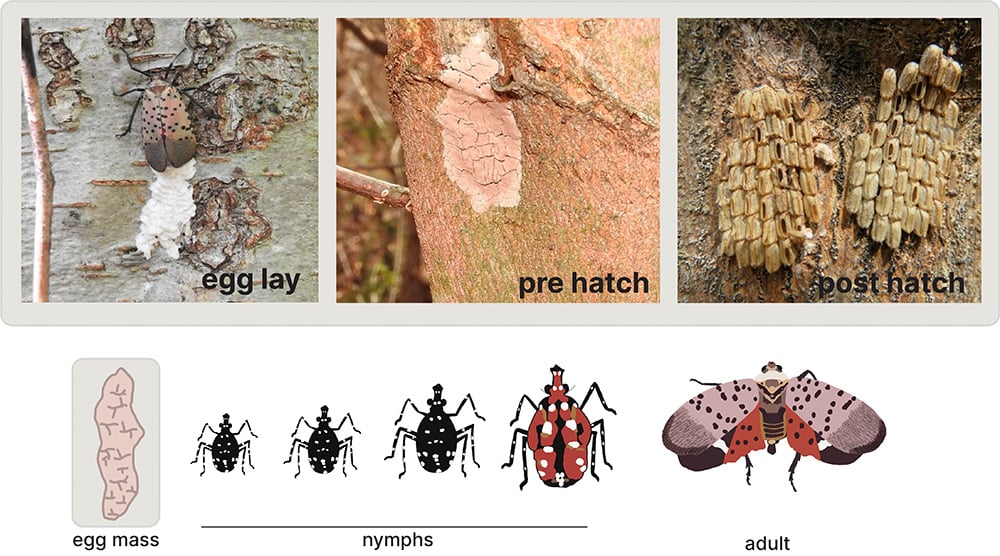 While an individual spotted lanternfly egg would be difficult to see, the way these eggs are laid (30-50 eggs enclosed in a capsule that looks a bit like clay) makes spotting them easy once you know what you’re looking for.

On trees, relatively smooth bark is the preferred surface for egg lay. Spotted lanternflies may also lay eggs on a range of other surfaces, including firewood, rusty metal, car tyres and garden furniture, increasing the risk of moving the insect to new regions. 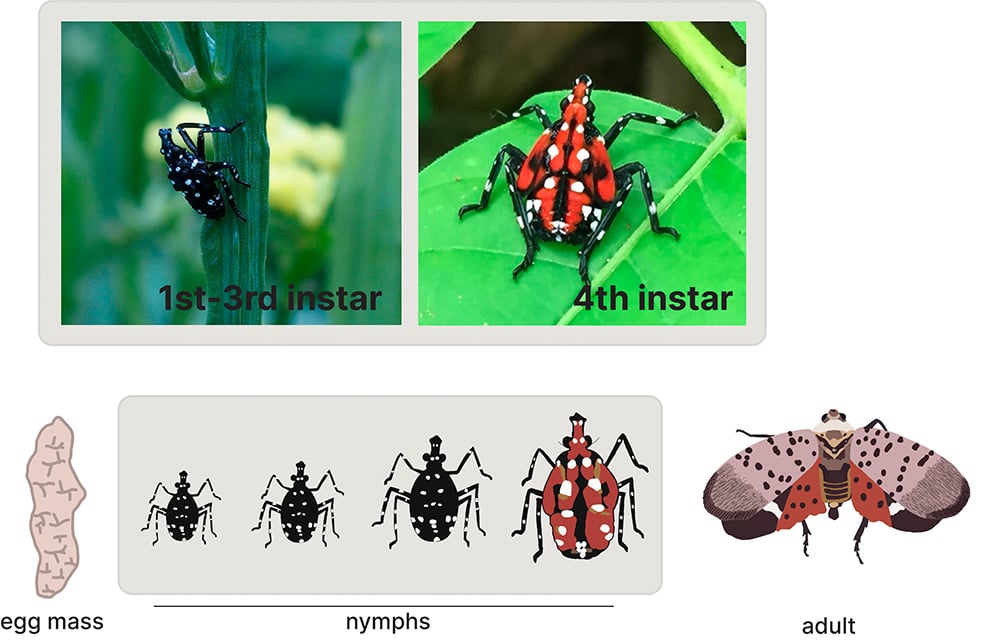 After an egg hatches, a nymph will emerge. This very young nymph will be black, with white spots, and it will move through four distinct growth stages over several months. When the final nymphal stage is reached, the spotted lanternfly becomes more colourful, turning predominantly red, with white and black markings. The legs remain black and white throughout development. 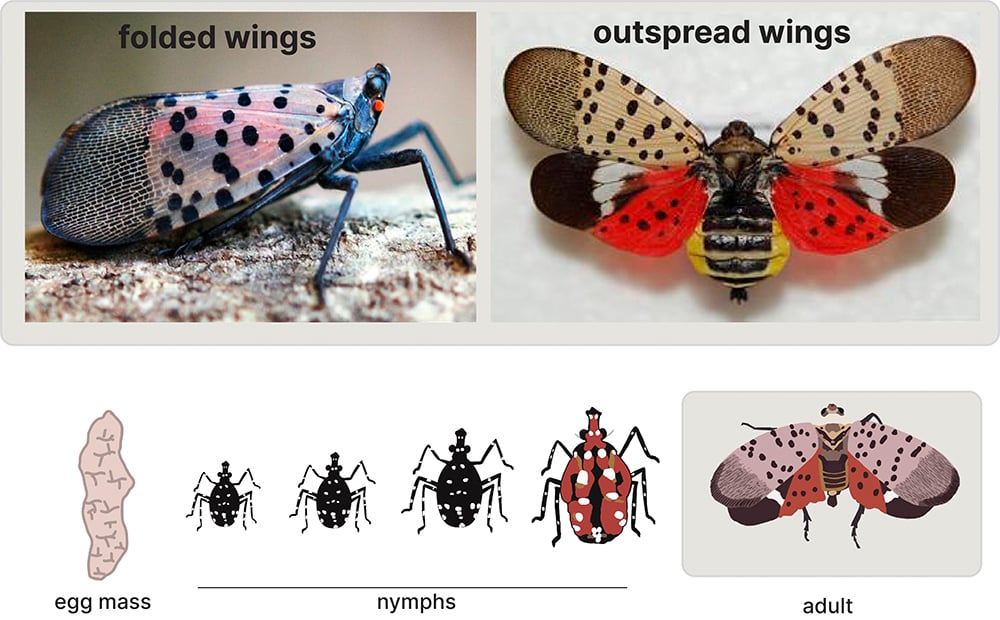 The adult life stage is by far the most eye catching. By this stage, the spotted lanternfly has grown a pair of wings. When folded, the forewings show large black spots at the proximal end (closest to the body) which become many rows of black lines about two thirds of the way down the wing. If you were to look closely you would see that these black lines look a bit like brickwork masonry.

The hindwings are even more striking. A large bright red patch dotted with black spots covers most of the posterior region (farthest from the head). The rest of the hindwing is patterned black and white.

The abdomen is yellow with black banding.

This species remains relatively small throughout its lifecycle, with the adult reaching 24-27mm from head to folded wingtip and nymphs ranging from 3.6mm-14.88mm depending on the growth stage. You would be forgiven for mistaking the adult form for a type of moth, as the wings do look similar to what you might find on a moth. However, this species is not so small that you could not make out the distinctive colours and patterning by eye or with a 10x phone camera or hand lens.

If you think you have seen a spotted lanternfly you should immediately report it by calling the Exotic Plant Pest Hotline (1800 675 888) which will direct you to your appropriate state department of agriculture. If you are hunting for spotted lanternfly as part of a biosecurity blitz, you can use the MyPestGuide Reporter App to report suspect detections.