The Australian IPDM program includes monitoring and cultural and chemical control practices integrated to manage Alternaria leaf blotch and fruit spot. Orchard sanitation is essential to reduce the levels of overwintering inoculum. This includes application of urea to trees or ground at leaf fall to promote breakdown of leaves and raking and mulching of pruned plant materials before leaf emergence in spring. In blocks with a history of disease, protective broad-spectrum fungicides can be applied once initial leaf symptoms appear in October-December to reduce sources of inoculum for further leaf infections and preharvest fruit infection, especially when warm and wet conditions prevail. These can be applied as part of regular late spring scab spray program.

Application of late-season protectant fungicides should be considered, as permitted by withholding periods, if the preharvest risk of fruit infection is high. There are fungicides effective against Alternaria that are registered for scab or for Alternaria control either as full registration or under permit (please consult your chemical supplier). After harvest, consider applying broad-spectrum fungicides at sites where severe defoliation has occurred.

In blocks where Alternaria has been a problem it is important to make sure that all winter prunings are mulched and completely broken down or are removed from the orchard and destroyed before leaves begin to emerge in spring. This will reduce the amount of carryover inoculum infecting new growth.

Management aimed at reducing overwintering black spot spore carryover will also be effective against Alternaria. Ground and foliar applications of urea well after harvest will help leaves to break down more quickly and completely. Fallen leaves and prunings should be swept into the inter-row so that routine mowing operations shred and mulch them allowing them to break down more quickly.

Most varieties are susceptible to this disease to some degree. The disease is particularly severe on Gala, Cripps Pink and Red Delicious. The disease is very rarely seen on Granny Smith. Note that trees of all varieties can become infected if they are stressed.

Maintaining overall tree health is particularly important in reducing the damage caused by this disease. While other maladies can exacerbate Alternaria leaf blotch and fruit spot, control of mites is particularly critical.

It is possible to get a reasonably accurate estimate of the severity of the Alternaria problem by closely examining leaves from around October onwards. At this stage the disease is indicated by presence of small purple lesions (see Figure 2). This can be used to guide decisions on the need for early and late season fungicide applications. However, where monitoring indicates that the disease is already well established then fungicide applications are unlikely to have a great effect, and more careful management is required for next season. 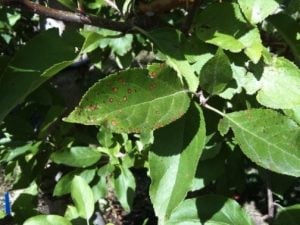 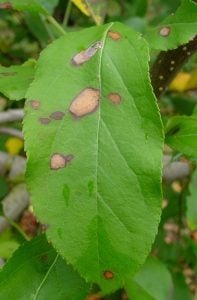 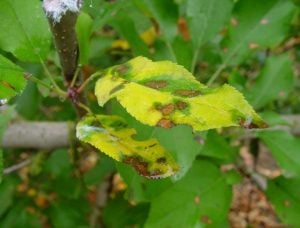 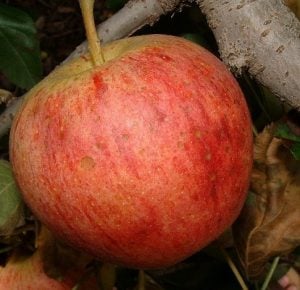 Responsible use of pesticides

The decision to apply protective fungicides for control of Alternaria leaf blotch and fruit spot should be made based on region (climate), cultivar susceptibility and block history (disease pressure) and, during the growing season, based on a combination of the risk of further disease development from levels of primary leaf infections detected during scouting and the weather. In orchards where the risk is known to be high, fungicide applications during two distinct periods of fruit development (early and late season) are required to properly manage Alternaria leaf blotch and fruit spot.

If the risk of Alternaria leaf blotch is always high, a block of three fungicide applications at weekly intervals must be applied from petal fall to suppress early disease development. The disease may not be evident at this stage but it may be present as very small lesions (see Figure 2) or overwintering spores in plant debris. Often growers only react when they see disease symptoms, but the benefits of spraying before symptoms are apparent will become evident later in the season. There are several protectant fungicides that will provide some degree of disease control have an effect but the greatest reduction in disease severity was observed with applications of trifloxystrobin as part of a scab program.

IPDM warning: Trifloxystrobin is compatible with IPDM but some group 7 chemicals that may be combined in products that contain trifloxystrobin can be detrimental to beneficials used in IPDM. (Refer to Table 5 in Chapter 6 of Apple and Pear IPDM Manual https://extensionaus.com.au/ozapplepearipdm/wp-content/uploads/sites/15/2021/04/2020-final-accepted-version-Apple-and-Pear-IPDM_V3.pdf for toxicity of fungicide active ingredients and READ THE PRODUCT LABEL). 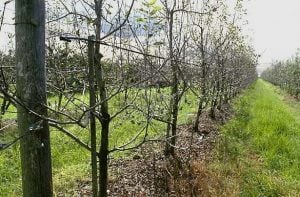 Figure 3. Severe disease caused by Alternaria spp. can result in defoliation of trees. This image was taken in January after an Alternaria infection (Photo: Apple and Pear IPDM Manual)

Early season fungicides will usually only provide early disease suppression and do not provide full-season control without the additional application of late season fungicides. Research conducted in Australia has shown that mancozeb and/or dithianon are good choices for late season spraying.

IPDM warning: Since mancozeb has negative impacts on some species of predatory mites that control European Red Mites (ERM) and the Trichogramma wasps that help control lightbrown apple moth (LBAM), growers in areas where ERM and/or LBAM are problematic should use orchard hygiene and appropriate early season tactics to reduce risks from Alternaria so that they do not risk disrupting the biological control of ERM and LBAM by needing to apply mancozeb later in the season. Problems may occur when there is significant rainfall during the withholding period of these pesticides. Apples cannot be harvested for 14 days following application of mancozeb and 21 days following application of dithianon. Applying both early and late season fungicides should reduce the threat of late season outbreaks. Regardless, fruit damage tends to only occur where leaf damage has been severe for a long period of time; maintaining tree health until two to three weeks prior to harvest should result in reduced fruit damage.

It is very important to realise that this disease will not be eliminated from orchards with a single season of careful fungicide application. Growers should adopt an integrated approach to the disease management and apply fungicides for at least four seasons, regardless of disease severity, to gradually reduce the amount of disease inoculum. Monitor the outcome of repeated applications and slowly withdraw any extra sprays where control has been achieved.

Caution: While some aspects of information from overseas may be useful, Australian Alternaria blotch and fruit spot behaves quite differently with respect to control. Recommendations from overseas publications should only be used in Australia with extreme caution. For example, Australian research has shown that many fungicides which have provided control overseas (such as captan) are ineffective on Alternaria here.

The above article is an excerpt from the Australian Apple and Pear IPDM Manual.

Many of the images in this article are taken from the Apple and Pear IPDM Manual which were obtained from Christine Horlock (Senior Plant Pathologist, QDPI&F).

The following local publications provide information which will be useful in understanding and managing this disease:

The Australian Apple and Pear IPDM webpage has a downloadable copy of the IPDM Manual – http://extensionaus.com.au/ozapplepearipdm

See pages 130 – 140 for the section on Alternaria leaf blotch and fruit spot.