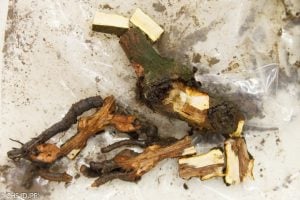 Failed graft union in a young apple tree and Botryosphaeria was diagnosed as the cause (Photo: J Edwards, DJPR)

Many trees and shrubs can be attacked by fungi and bacteria that cause cankers that lead to dieback. Cankers are lesions in the bark of the trunk (stem), branches or twigs and may appear as open wounds. Sometimes the cankers affect both the bark and the wood. Cankers in the wood show as brownish discoloration of the water transport (Xylem) tissues. Botryosphaeria fungi are found in most diseased woody tissues and are usually opportunistic pathogens that only affect stressed trees. Some species, however, can be serious pathogens resulting in dieback and death of the tree. They infect via wounds.

Young apple branches with cankers along them (ie dead lesions). Where the cankers have been cut into, the discoloured wood is evident. This was also diagnosed as caused by Botryosphaeria (Photo: J Edwards, DJPR)

In orchards, pruning wounds, borer or plant hopper/ cicada attack, damage caused by sunburn and sunscald, broken limbs and mechanical injury all create entry points for Botryosphaeria. Drought stress reduces the plant’s defence against infection but excessive watering and poor drainage that kills roots will also make plants susceptible to canker. Infected limbs can be pruned out by cutting well below the canker and treating the wound with sealant. Disinfect the pruning tool between cuts. If the infection is in the trunk or roots it is better to remove the whole tree.

If young trees are affected and cankers are occurring at the graft union and working down to the root system, it may be a nursery issue where infections occurred at grafting.

Botryosphaeria fungi overwinter on dead tissue that is often indicated on infected apple and pear trees by peeling bark. Small black fruiting bodies will usually be present on the bark. A wide range of pome, stone, conifer, native and ornamental tree species are susceptible to Botryosphaeria cankers. 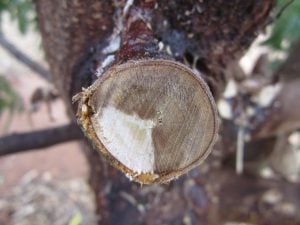 A cross section of an apple branch with a large canker. The cross section shows the wood that has been killed by Botryosphaeria. The white wedge is the remaining living wood and in time will also die. (Photo: J Edwards, DJPR)