Control of mealybugs is notoriously difficult because their waxy secretions reduce penetration by insecticides. In apples and pears, mealybugs also hide in the calyx end of the fruit, meaning infestations often go unnoticed until the population is above action thresholds. 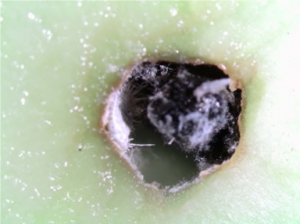 Mealybugs hiding in the calyx of fruit – meaning infestations often go unnoticed until the population is above action thresholds, and it can be difficult to get good chemical coverage (Photo: M Veens)

The mealy secretion and waxy covering they produce protects them from being wetted by chemical sprays. Their habit of hiding in tight, confined spaces such as under bark and the calyx extremely difficult to get the required coverage. Most pesticides that have any effect against mealybugs are toxic and almost always cause greater harm to beneficial species leading to a resurgence of the pest in a very short time. Mealybugs are quick to develop resistance to synthetic pesticides.

As more insecticides are used to reduce mealybug, the worse the situation becomes.

Fortnightly monitoring is important during the growing season. Look in the calyx of developing fruit during harvest at weekly intervals and record any mealybug presence.

During dormancy, check under bark or other sheltered places for overwintering larvae or adults. While monitoring for mealybugs, keep an eye out for ant activity to determine if additional

management measures are required (see section below on ants).

Good orchard hygiene is critical for mealybug control. Infested material should not be used as mulch but should be removed from the field and destroyed. Mealybug infestations are worse on dusty trees.

Cryptolaemus are Australian native ladybird beetles that feed voraciously on a range of mealybug species. They are so effective that they have been introduced to many other countries in the world. 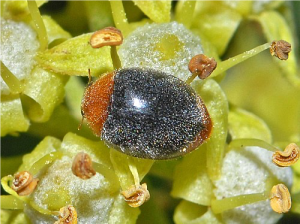 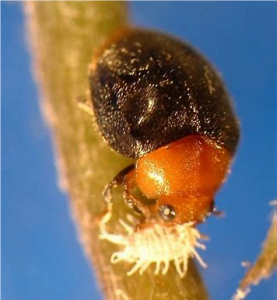 Wasps can be extremely effective as they are highly mobile and efficient at seeking out their prey.

Often forgotten is the common European earwig. Earwigs are an important predator of mealybugs and often prevent damaging infestations developing.

Earwigs are general predator and preying on smaller insects and arthropods. The main cultural control approach is to foster populations of natural enemies, especially predators. This can be done in several ways.  Insect houses should be used to foster earwigs. Build insect houses like this one  use 13 mm irrigation pipes, about 12 cm long. 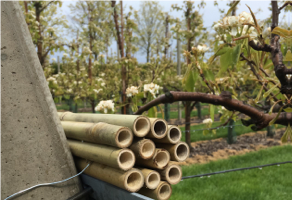 Earwig populations can be boosted by providing habitat for them such as these pipes (or use 13 mm irrigation pipes, about 12 cm long) Photo: M Veens

A weed mat can be a good hiding place for earwigs who start breeding in Spring. Ideally, a refuge should be provided in each tree. This may simply be some extra lengths of irrigation pipes attached to the trunk. In orchards with a high tree density, it is likely to be impractical to provide more elaborate refuges such as half of a plastic drinks bottle containing a roll of corrugated cardboard.

Ants are often associated with mealybugs in a two-way relationship. The ants’ benefit by feeding on the honeydew produced and in return they protect the mealybugs from predators and parasites. Controlling or restricting access to ants can do a lot to reduce the abundance of these difficult pests. If ants are present, try to identify the location of their nests. Physically destroying ant nests in the orchard will reduce the number of ants that are protecting and spreading the mealybugs, rendering it more vulnerable to predation by beneficial insects.

A different approach to the escalating mealybug problem is required, as the more insecticides are used in an attempt to reduce mealybug damage, the worse the situation becomes.

Orchardists in the Stanthorpe region of Queensland and the Shepparton region in Victoria and in some orchards in WA reported mealybugs as their most serious orchard management problem.

Considerable time and money are currently spent by growers dealing with the aftermath of mealybug damage to fruit.Backpackers are even being employed to clean the sooty mould out of the calyx and stem end of pome fruit using toothbrushes. In addition, a wide range of insecticides are being applied in a manner that is not only ineffectual in preventing mealybug infestation, but disruptive to integrated pest management.

Current practice in Australian apple and pear orchards is to apply insecticides early (prior to flowering) to kill mealybug crawlers moving on the bark. In most situations, follow up are required at regular intervals throughout the growing season. Mass release of commercially available Cryptolaemus predators will provide “cleaner and greener” control. Mass releases of Cryptolaemus reduced mealybug populations but not sufficiently to satisfy the expectations of the fresh produce market.

Mealybugs are very difficult to control chemically as outlined above. Horticultural oils can control mealy bug by blocking their breathing pores and this suffocates the pest. There is no way that pests will ever become resistant to oil. It is known to complement the use of pesticide as it provides quick ‘knockdown’.

As more insecticides are used to reduce mealybug and woolly aphids damage, the worse the situation becomes.

Use of synthetic pyrethroids, which are harmful to natural enemies, should be avoided.

For detailed information on mealybugs, monitoring and biocontrol refer to pages 236-237 of the IPDM Manual: https://extensionaus.com.au/ozapplepearipdm/wp-content/uploads/sites/15/2021/04/2020-final-accepted-version-Apple-and-Pear-IPDM_V3.pdf