Fruit growers in northern Australia (Queensland and New South Wales) have had problems with the Grey Headed Flying Fox ((Pteropus poliocephalus) for a long time. Now this native mega bat species continues its movement south and westwards due to habitat issues, drought and competition with the Black Flying Fox (P. alecto), making it an increasingly significant pest of apple, pear and other fruits in the southern mainland states of Victoria and South Australia. Colonies have been sighted as far south as Geelong and Adelaide in the west.

They normally feed on pollen, nectar and fruit of native and introduced species. Eucalypt species are a preferred option. Their preferences depend on what food is available at the time. 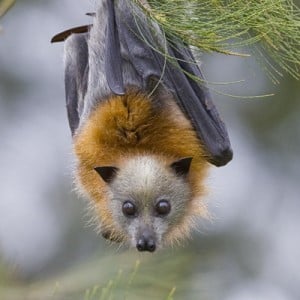 This species is considered “endangered” and therefore protected by environmental legislation (State and Federal) but has increasingly become a more significant pest of orchards because of its territory spread and visitations to orchards.

These bats are voracious feeders consuming up to their own body weight in fruit each night. They take the fruit, hang upside down on the tree or a nearby windbreak tree and essentially squash the fruit in their mouth, suck out the juice, then spit out the pulp. However, it is not only the consumed fruit that is a problem. Bats will bite and scratch fruit but not eat it and their hanging behaviour means they also damage tree structure by breaking limbs. 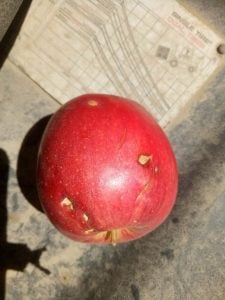 Lethal control measures are forbidden by the legislative protections of the species. Extensive research has shown that the only economic method to protect orchard fruit is to totally net the orchard. This is an expensive option but increasingly important to control the damage caused by this species.

There are 3 zoonotic viruses that are potentially fatal to humans associated with Bat species: the Hendra virus, Australian bat lyssavirus and Menangle virus. Only the Australian bat lyssavirus is known to be directly transmissible from bats to humans. However extreme caution should be taken with this bat species and orchardists are advised not to handle these bats (dead or alive). If scratched or bitten you must seek immediate medical attention which will usually require the ABLV post-exposure vaccine.

There are a number of organisations that have members both immunised and trained in handling Bat species, they should be contacted if the handling of any bat species is required. The details of the closest group to your region can be obtained with a quick internet search.