Nematodes are mostly less than 1 mm long roundworms that often live in the soil. Many nematodes feed on soil microorganisms and contribute beneficially to the cycling of nutrients. However, some species use mouthparts (stylets) to parasitise plants.  These can be categorised as endoparasitic (e.g. enter the root tissues) and ectoparasitic nematodes (e.g. remain outside the roots and use their stylet to feed on root hairs).

What are root-lesion nematodes (RLNs)?

Root-lesion nematodes (Pratylenchus spp) (figure. 1) are migratory endoparasites that feed and reproduce inside plant roots. Damage to plant roots can lead to yield loss in crops such as apple and pear. Pratylenchus penetrans appears to be the species reported most frequently and globally in association with apple replant disease.

What are the symptoms of root-lesion nematode infection?

Root-lesion nematodes invade the root tissue resulting in light browning of the roots or localised deep brown lesions (Figure 2). However, these lesions are difficult to see on roots. The damage to the roots and the appearance of the lesions can be made worse by fungi and bacteria also entering the wounded roots. Roots infected by root-lesion nematodes are poorly branched, lack root hairs and do not grow deeply into the soil profile. Such root systems are inefficient in taking up nutrients and water which result in symptoms of nutrient deficiency in trees. Infected crops can wilt prematurely, particularly when conditions become dry later in the season because the damaged root systems are inefficient at taking-up stored soil moisture. Apple root stocks will vary in their susceptibility to both the root lesion nematode and susceptibility to disease. 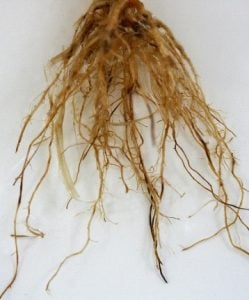 To make management decisions, it is important to know the nematode species present and their population densities. If a previous orchard had problems caused by the same species of nematode that are listed as pests of apple, population levels may be high enough to cause damage to young trees. If nematode species have not previously been identified, soil samples should be taken and sent to a diagnostic laboratory for identification. Contact your farm advisor for more details about sampling, to help you find a laboratory for extracting and identifying nematodes, and for help in interpreting sample results.

SARDI (South Australian Research and Development Institute) have a Predicta P service. Designed for potatoes but relevant to other crops, Predicta P will give an indication of DNA in the soil to identify if nematodes are there. When soil sampling, some suggest to sample roots of the trees or weeds for nematodes, and the time of year is important too, i.e. when the nematodes are active.

Remove old roots. Use of an excavator with grab attachment to extract the tree and major root system may be a better option than either deep ripping or using a bulldozer to remove the existing trees. Plant green manure cover crops resistant to root lesion nematodes for 1 to 2 years or fallow the site for 4 years. A wide variety of cover-crops have been found to be beneficial for inhibiting nematodes such as marigolds (Tagetes patula cv. Sparky) against P. penetrans, Indian mustard (Brassica juncea) against Pratylenchus penetrans and P. projectus, as well as Sudan grass, annual ryegrass and tall fescue (as green manure crops). Clovers and buckwheat also should be excluded from orchard covers, as these are excellent nematode hosts.

Improve soil tilth and drainage and control other pests. Proper irrigation and fertilizer application will also reduce stress on trees. Rootstock choice may be made for nematode-resistant varieties. Addition of sawdust (old, not fresh) or straw mulch (1m wide, 7-10cm deep along the row of trees) is recommended, but growers need to be cautious about the creation of nutrient-imbalance inherent in addition of high-carbon, low-nitrogen materials in bulk.

Nematode attack could be controlled by application of a nematicide prior to planting. However, a limited response to nematicides was noted for 40% of the orchards examined in Victoria, indicating nematodes to be one of the important components of apple replant diseases.

The invasive stage of the life cycle in RLNs is a second instar juvenile (J2) recently emerged from an egg. Time from emergence from the egg to invasion of the root is usually a matter of a few days (up to 2 weeks) for most RLNs. Therefore, once attached to the root, RLNs are difficult to detect and control; efficacy of a contact nematicide rapidly declines at this point until the next egg hatching stage. If the population of nematodes are too high, fumigation may be considered in some situations for control of nematodes.