At this time of year woolly apple aphid colonies will be starting to expand as crawlers emerging from overwintering sites on the roots, begin to establish on the shoots, and aphids in colonies that survived on branches over winter begin to multiply. The tiny wasp (A.Mali) parasitises woolly apple aphids by laying its eggs into the aphids, causing them to become ‘mummies’ in which the wasp larvae develop and eventually kill the aphid. Signs that A.mali is active are the presence of black mummies in amongst the aphid colony. If the mummies have a hole in them it means that the wasp has reached maturity and exited the mummified aphid. A.mali can be introduced into unparasitised woolly aphid colonies if you or someone you know already has it present in parts of an orchard. 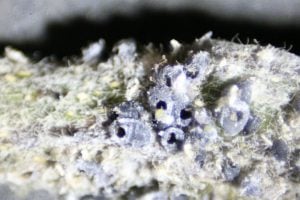 It is possible to conserve the wasps by collecting infested branches or twigs early in winter, before spraying, and storing them in a coolroom (not in a freezer) until mid-spring. The branches or twigs can then be placed in trees showing signs of aphid infestation in early-mid spring. 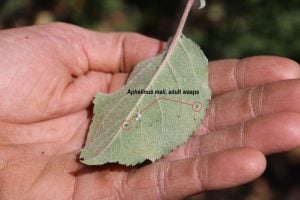