A voice for Aboriginal leadership 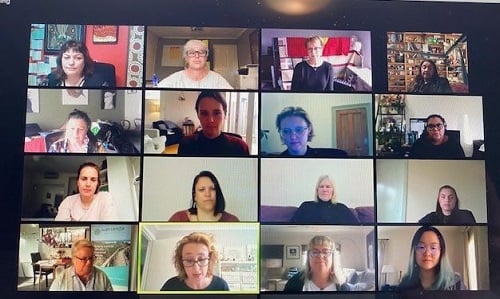 A new advisory group of eight inspirational women is working to design a leadership program to advance the participation of Aboriginal¹ women across government, businesses and communities.

The Aboriginal Women’s Leadership Program Advisory Group (the Advisory Group) met online for the first time in August to guide consultations with Victorian Aboriginal women to self-determine a tailored approach to leadership.

The Advisory Group, initiated by Women Victoria and led by Yorta Yorta woman Karen Milward, who has experience in governance and leadership programs for Aboriginal peoples, includes two regional women from Northern Victoria.

Judy Ahmat, a Gunditjmara woman, was born in Warrnambool and now lives in Wodonga where her work for the past 30 years has been with Aboriginal young people, the juvenile justice system, education and community health. She runs a consultancy firm and holds a Master of Social Work.

Further west in Shepparton, Kylie Briggs is involved with the Rumbalara Football Netball Club where the Aboriginal community-run sporting club works to strengthen ties and bring families together via sport.

The club dates its history back to playing ‘Marn Grook’ – a traditional Indigenous Australian football game – and now plays in the Goulburn Valley Football League. Kylie is Finance Manager at the club, which fields netball and football teams and has grown into a community hub providing education, health and social support.

Minister for Women and Aboriginal Affairs Gabrielle Williams said in a media release that this first group of women would help pave the way for the next generation of Indigenous leaders. “Empowerment and self-determination play a key role in progressing equality for Aboriginal women – that is what this program is all about.”

¹ Throughout this document the term Aboriginal is used to refer to both Aboriginal and Torres Strait Islander people.

Pictured above: Members of the new Aboriginal Women’s Leadership Program Advisory Group at their first virtual meeting in August

I would love to be connected with these Indigenous Leaders. I am co-ordinating Rotarians across Australia in a new Rotary initiative, HIP (Honouring Indigenous Peoples) Australia with the aim of building relationships between Rotary clubs and their local Indigenous Communities, to listen and learn about Indigenous experience of our shared history, and to work together in reconciliation and peace. We are also wishing to engage Rotarians in working alongside other more remote Indigenous communities as well on projects that the Indigenous communities identify as needing, to help close the gap on Indigenous disadvantages. We are at an early stage in developing this and would like to have a 50% Indigenous, 50% Rotarian input.

Thanks for your message. The Aboriginal Women’s Leadership Advisory Council is run out of the Victorian Office for Women (Women Victoria). I have referred your query to them and wish you all the best with your initiative. Thanks