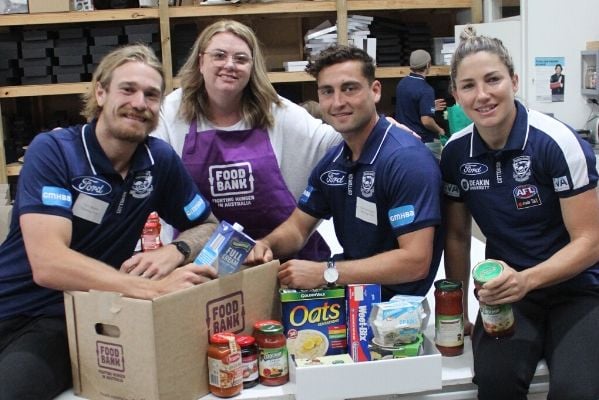 Geelong’s Nicole Newman runs a gourmet hamper business and is chair of the local Agribusiness Forum. But in January she, like many others, felt driven to do what she could to help the bushfire crisis.

Working in conjunction with Foodbank Victoria, the Melbourne-based food redistribution charity, Nicole put out a social media call for donations of food and bathroom items to her Geelong warehouse.

Marshalling volunteer helpers through family, local groups and businesses, she opened the doors of her warehouse two days after the call-out and was immediately inundated with donations. “We did 30 pallets on that day and it went straight up to Foodbank to distribute.” A second late-January collection, aided by the Geelong Football Club and its players, was similarly successful.

Geelong’s rallying call was repeated in many ways across social media platforms all summer — groups and individuals thinking up creative ways to help fire-affected communities. It included everything from knitting to help injured wildlife, to companies offering business-focused support, to tradies linking up to help rebuild and authors auctioning works and experiences to raise much-needed cash.

Many people have asked Nicole what prompted her to organise the food collection. “Really, it’s because someone has to stand up and do it,” she says. “You need leadership in all sorts of areas; I’m not able to fight fires but I can do this.”

She says the food collection also gave the people of Geelong and Western Victoria a much-needed way of contributing, rather than leaving them feeling helpless. “When we say Geelong, we’re really saying also the Bellarine Peninsula, the Surf Coast Shire, Golden Plains Shire and Otway Shire. I’m chair of the Agribusiness Forum here and I know these communities and I know how much they want to be involved,” says Nicole.

Nicole adds those who donated also recognised that this summer Gippsland needed help but soon it could be Western Victoria.

She was overwhelmed by people’s generosity. “We were meeting people who could afford to go out and buy 15 bags of food and others who brought one bag and would go without a little that week.”

By late January, Foodbank had created 6000 food boxes to deliver to fire-affected areas and Nicole is delighted she, and the Geelong community, have been a part of that.

Tell us about a community initiative you are involved in. Email VRWNetwork@agriculture.vic.gov.au.