Over the hump in a new industry 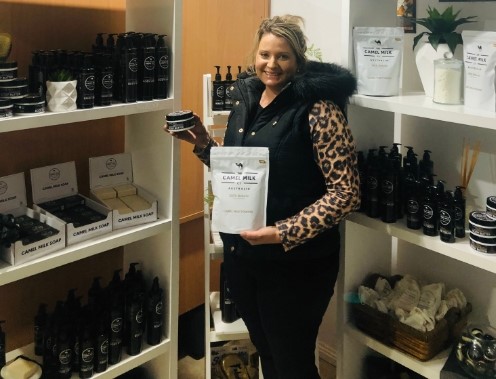 Megan Williams describes the past four years she and husband Chris have spent establishing The Camel Milk Co. at Kyabram as a roller coaster ride and the biggest challenge of their lives.

Born and bred a Victorian dairy farmer, Megan fell in love with camels during a stint on Andado Station in the Northern Territory as a station hand. She met Chris there, and after moving back and working on her parents’ dairy farm, they both decided on a new future in camel milk.

“Our milk is sold around Australia and in select countries overseas, and we have also expanded our range with powder, fetta and chocolate,” says Megan. “Camel milk doesn’t contain beta-lactoglobulin, which is a known dairy allergen, so our camel products often suit people with intolerance to traditional dairy products,” she explains.

Megan and Chris juggle the demands of growing the camel dairy business with a hectic home life that includes caring for their three boys, aged four, five and six.

She reflects that if the camel milk industry had been an existing one, it would have been easier. Despite this, she says they have enjoyed leading the way in establishing production systems and markets for the milk and milk products.

“We had to experiment with various milking cups and teats, and animal nutrition as well as fencing alternatives, not to mention new regulatory requirements to see what worked best,” she says.

“Our sales were helped initially by good media exposure that introduced people to the new milk and increased public interest,” she adds.

Sales of their fresh camel milk have tripled in the past two and a half years, with the camels producing about 250 litres a day for either milk or milk products. Through a strong network of distributors, they project doubling or tripling that production in the next two years.

Their main market is Melbourne but they also service all Australian cities, and last year started exporting fresh milk into Singapore, with a view to selling to Thailand this year.

“One thing we’ve established is that you do need to be passionate about starting a new industry and you’ve got to love it,” says Megan. “We certainly love it and the business has so much more potential,” she says.