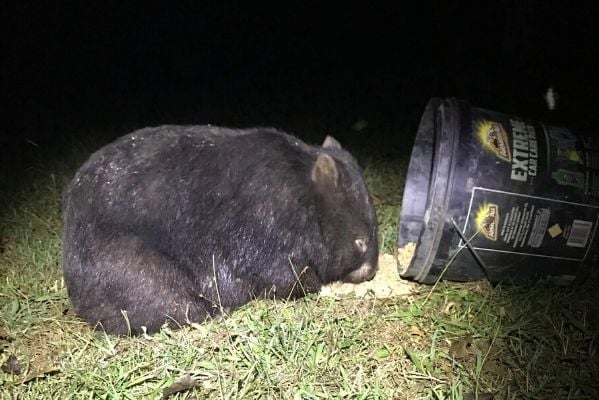 As the East Gippsland fires sped towards Goongerah Wombat Orphanage in January, carers fled for their lives, hoping that some of the wombats they had raised from joeys would survive.

Amazingly, when the fire had passed, the workers returned to discover that, while all the bush around the orphanage had burnt, the house and grass around it remained.

In an emotional Facebook post, carer Emily Small described the emotional return to the orphanage. “We drove into the house yard in the early hours of this morning and poured an entire bag of feed out onto the ground. And waited.

“Our orphans slowly began to creep out from every direction, and we fell onto the pile with them. Tears, dirt, ash and all,” she said.

Dr Megan Davidson, Chief Executive Officer of Wildlife Victoria, says the survival of the Goongerah wombats was a rare high point in a summer that has seen thousands of native animals perish. “Those particular wombats got lucky; they had nice deep burrows and it burned all around the house — even some of the animal shelters burned but there’s still grass,” she said.

Dr Davidson says with the widespread destruction of habitat, the crucial issue for native wildlife is now protection from predators and provision of food. Wildlife Victoria is encouraging locals in fire-affected areas to support-feed wildlife with specialty grass-based pellets from feed stores where possible.

The State Government has also stepped in, conducting aerial food drops and announcing a $17.5 million rescue package focused on endangered species. It is also offering grants of up to $1000 to help wildlife shelters and carers.

Dr Davidson says residents in fire-ravaged areas are also doing their bit. “People are putting up possum boxes and creating animal shelters. Chicken wire and shade cloth can protect small animals; foxes and feral cats can’t get in,” she explains.

At Goongerah, work is already underway rebuilding enclosures and shelters, replanting grass and replacing what was burnt.  If you want to support the wildlife effort, donate to Wildlife Victoria.

Pictured: Rue, a hand-reared orphan from Goongerah Wombat Orphanage on the night the wombats were found to have survived the fires. Credit: Wildlife Victoria