The Botanic Gardens Biosecurity Network is hosting a myrtle rust blitz from 12-20 September 2020. You can participate in the blitz by looking for myrtle rust in your backyard or local botanic gardens and reporting your findings with the MyPestGuide™ Reporter app.

What is myrtle rust?

The pathogen originated in South America and was first identified in Australia in 2010. It is not known how myrtle rust entered Australia but it is now widespread along Australia’s eastern coast from southern NSW to northern Queensland. It has also been reported in parts of Victoria, Tasmania and the Northern Territory. Overseas there are known to be several strains of A. psidii. At this stage only one strain is found in Australia.

Myrtle rust spores can be spread easily on clothing, hair, skin, personal items, infected plant material and equipment as well as by wind dispersal and insect and animal movement. Spores can also remain viable for up to three months. These factors make the disease extremely difficult to control and impossible to eradicate from natural settings.

The first symptoms of myrtle rust become visible within 3−5 days of initial infection and are most easily seen during periods of growth (flush). Young, soft, actively growing leaves, shoots and stems are more susceptible than mature plant tissue.

The disease starts as small spots on leaves which become yellow pustules sometimes with purple edges. Over time the yellow pustules fade and become brown then grey over time. Leaf distortion can also occur in some species if the plant is heavily infected.

Myrtle rust is easily identified in the field by the yellow pustules on new plant growth, no other diseases cause these symptoms on Myrtaceae. However, once the pustules age they become brown and can be confused with other diseases or even insect damage.

Myrtle rust can be confused with yellow-coloured lichens growing on tree trunks or branches, but unlike lichens the fungal spores of a myrtle rust infection are powdery. 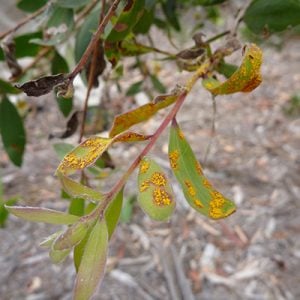 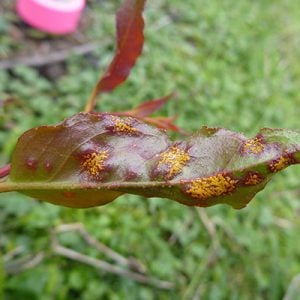 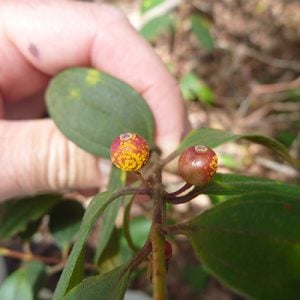 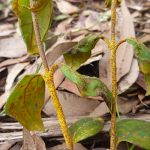 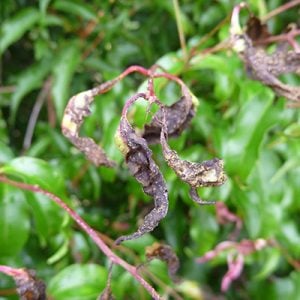 How to get involved

Between 12 and 20 September 2020, look for myrtle rust on up to five different plants belonging to the Myrtaceae family. Report what you find using the MyPestGuide™ Reporter app. Make a report even if you find no rust on a plant you inspect.

To make a report:

REMEMBER: Select the ‘Botanic gardens’ project from the ‘Send report to’ drop-down list in MyPestGuide™ Reporter to make sure we see your report.

If you find an unusual plant pest or disease outside of the Botanic Gardens Biosecurity Network surveillance blitzes, please report it though MyPestGuide™ Reporter or call the Exotic Plant Pest Hotline (1800 084 881).

To learn more about making a report though MyPestGuide™ Reporter check out this article.

For a summary of how to participate in the myrtle rust blitz download this flyer.

I feel this requires internet at the location to complete this. Can I just upload the picture? I have this on my property and it has almost wiped out a tree species so I would like to participate but I am in a black spot.

Hi Frankie, thank you for your feedback regarding access to the app. If you are unable to use the app we would still love to receive a report from you. Rather than using the app, you can make a report using the online MyPestGuide™ Reporter tool or email your report to botanicgardens@phau.com.au and include the following information:
• Location (address or GPS co-ordinates)
• Images of what was found
• Species looked on if known
• Presence of myrtle rust
• A statement agreeing to share report.

We found myrtle rust on our plants in 2011 in Gympie. The plants were Eugenia Reinwardiana or cedar bay cherry. Most were culled but the ones that remain have less yearly infection but a lot less fruit .

Hi Sally, unfortunately it is very difficult to eradicate. However, there are things that you can do to limit the spread of the disease which include good hygiene practices. Another option may be to replant with resistant species. Advice on treating myrtle rust can be found on the Agriculture Victoria site here and on the Greenlife Industry Australia site here.

How do you get rid of it

Hi Narelle, unfortunately it is very difficult to eradicate. However, there are things that you can do to limit the spread of the disease which include good hygiene practices. Advice on treating myrtle rust in home gardens can be found on the Agriculture Victoria site here. Briefly, treatment options may include chemical treatment with fungicides for infected plants or removal of infected parts or whole plants. Another option may be to replant with resistant species.