Myrtle rust is a plant disease caused by the rust fungus Austropuccinia psidii which is believed to have originated in South America. It affects more than 400 species in the Myrtaceae family including many iconic Australian native plants.

Since myrtle rust was first identified in Australia in 2010 the disease has spread rapidly by wind, and on plants, people and equipment. The disease is now found along Australia’s east coast from southern New South Wales to northern Queensland. It has also been reported in parts of Victoria, Tasmania and the Northern Territory. 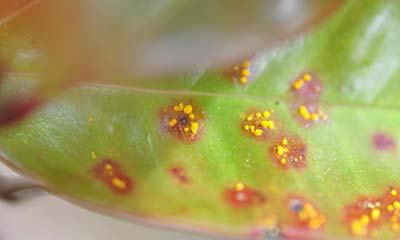 Typically, the disease starts as small purple spots. Within the purple spots, yellow pustules form which over time fade to grey. In more susceptible species or when infection levels are high leaves become distorted and growing tips and other soft material rapidly die. Young, soft, actively growing leaves, shoots and stems are more susceptible than mature plant tissue, and in highly susceptible hosts the whole plant may die.

Learn more about myrtle rust and its environmental, commercial and social impacts in the three videos below.

A scientific definition of myrtle rust

In this video produced by the New Zealand Ministry for Primary Industries, Karin Van Walt Conservation & Science Advisor at the Otari Native Botanic Garden provides a scientific definition of the disease. She also describes what conditions are favourable for the fungus and how the disease spreads.

Dr Geoff Pegg, a forest pathologist and myrtle rust expert, describes the spread and impact of the disease in Australia in this video produced by the former Plant Biosecurity Cooperative Research Centre. He discusses its impact not only on the environment but also its commercial and social impacts. 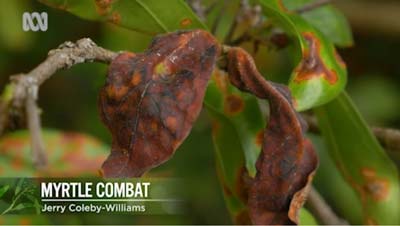 Gardening Australia’s Queensland presenter Jerry Coleby-Williams speaks to Dr Rod Fensham, a botanist from the Queensland Herbarium about myrtle rust in this segment of Gardening Australia. They focus on the impact of the disease on native guava (Rhodomyrtus psidioides) and whether there is a potential of conserving it in the face of myrtle rust.

More information about myrtle rust in the states and territories where it has been detected is available from the following links: