Parasitoid wasps, mass trapping of female codling moths and the use of mating disruption could, when combined, help control codling moth in apple and pear orchards, and reduce pesticide use.

Changes to the types of pesticide available for use in fruit production, and the progress of research into biological control of major insect pests, is providing fruit growers with safer, cost effective, and environmentally friendly options to incorporate into their pest management systems.

Codling moth is the most serious pest of pome fruit worldwide and the most damaging pest of commercial apple, pear, quince and nashi orchards in Australia. It is widely distributed in all Australian states except Western Australia and the Northern Territory. Codling moth was controlled by multiple applications of organophosphate insecticides until the pest developed resistance to the pesticides. Newer pesticides with lower human toxicity are more specific but not as effective.

Codling moth overwinters on pome fruit trees as diapausing (hibernating) mature caterpillars in cocoons in sheltered areas such as under bark scales on the trunk. In spring, as the day-length increases and temperatures warm up, the hibernating caterpillars break diapause, enter pupation and eventually emerge as adult moths ready to mate and lay eggs.

The aim of mating disruption is to prevent, or at least significantly reduce, mating between male and female moths but if there are enough female moths present mating can still occur. It is therefore important that fruit growers have access to a number of tools that can help reduce the number of female moths in their orchards.

The wasps were introduced into Australia after five years of host specificity testing in quarantine as part of the Productivity, Irrigation, Pests and Soils (PIPS) research project. Although approved for release in Australia, it will be another few years before sufficient wasps have established to exert a major influence on codling moth populations. 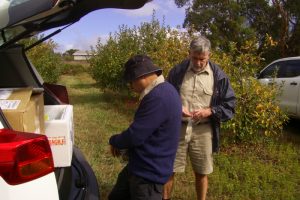 Field release of Mastrus in a Queensland orchard

The parasitoid was released into one orchard in the Goulburn Valley in 2014 to establish a nursery site and to provide a field site in which establishment issues such as dispersal, predation, and hyper-parasitism could be studied. We released Mastrus into sites in Queensland in April 2016, and are aiming to release into New South Wales, South Australia, Tasmania, and southern Victoria.

Diapausing codling moth larvae removed from laboratory culture tubes were placed into the corrugations and then returned to diapause conditions in a cool room. Bands were transported to the field sites in a chilled esky.

Four sentinel bands were deployed at each of the six original release sites in the orchard. One band was placed on four trees at each site. The bands were placed low on the trees near where codling moth larvae would be expected to spin cocoons.

Bands removed from the field were taken to the laboratory for incubation to observe any species that emerged. Bands were contained in clear plastic zip-lock bags and placed in the laboratory for observation. Any wasps emerging were collected and identified.

After sufficient time had passed for Mastrus to have completed larval development, pupation and adult emergence, the bands were removed from the bags and the corrugations were teased apart to inspect the contents. Codling moth larvae consumed by Mastrus are easily distinguished from those that have been consumed by predators because in the latter case there is generally only scattered remains, if anything is left.

Low levels of parasitism were detected, but there was also considerable predation in the bands by earwigs and ants. We also detected a pupal parasite from the Ichneumonid wasp genus Gotra which contains six described species in Australia, including Gotra pomonellae that was reared from codling moth. We are seeking confirmation of the identity of our specimens.

Two sites near Stanthorpe, Queensland, were selected after consultation with local researchers, consultants and growers. Parasitised codling moth diapausing larvae in corrugated cardboard bands were placed in chilled eskies. The eskies were consigned to Brisbane by air mid-afternoon on 26 April 2016 via specialist pet cargo, alongside modified fruit fly traps used to contain the bands when placed on trees. The cargo was collected in Brisbane and driven to Stanthorpe on the 27 April. Mastrus were released into the orchards on the 27 and 28 April 2016.

Four bands containing the parasitised larvae were placed in each modified fruit fly trap and the traps were then distributed across the release site, a single block of apples in an orchard. The coordinates of each release site were recorded by GPS to make it easy to find on follow up visits.

Approximately 20,480 Mastrus were released at Site 1, using 32 trees. At Site 2, approximately 17,280 Mastrus were released, using 27 trees. Mastrus adults were observed emerging during the release process. Adult parasitoids were evident at both sites for a week after release. Establishment will be investigated in the 2016-17 fruit growing season.

Until recently it has been difficult to catch female codling moths in traps. A chemical ester isolated from pears and added to pheromone traps has changed that situation in apple orchards but did not perform so well in pear orchards, probably because of competition from the pears themselves.

A recently completed research project has demonstrated that adding an extra plant volatile to the pheromone-pear ester mixture can increase the capture of male and female codling moths in pear orchards treated with mating disruption. Mass-trapping using the lures developed in the project will reduce numbers of both male and female moths. This will enhance the potential for pheromone-mediated mating disruption to maintain codling moth populations, and resultant fruit damage, at low levels.

Mass-trapping will complement biological control of codling moth by the recently released parasitoid wasp Mastrus ridens through reducing the risk of exposure to pesticides that may be toxic to the wasp. 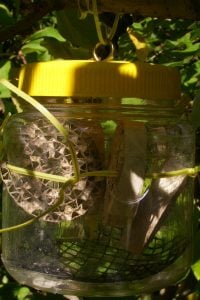 During winter 2016 a range of commonly used pesticides will be screened in laboratory tests to determine their toxicity to the wasp.

Recent reports suggest that growers may be reverting to full pesticide programs, despite the threat of resistance developing against newer pesticides. Recent increases of Queensland fruit fly populations resulted in growers seeking advice that includes spraying of pesticides. Such spraying is likely to severely disrupt current Integrated Pest Management programs.

Several projects are being developed to find alternatives to spraying fruit flies. These include the use of SIT (Sterile Insect Technique), improved baiting and trapping, and Area Wide Management approaches.

The apple and pear industry still has a goal of reducing pesticide usage to ensure market access is protected. The release of the codling moth parasitoid Mastrus ridens, combined with mass-trapping of codling moth females and the use of mating disruption will potentially avoid the over-use of insecticide cover sprays and provide effective biocontrol of codling moth in pome fruit.

Dr David Williams is a Principal Research Scientist, with the Department of Economic Development, Jobs, Transport and Resources, Victoria: david.williams@ecodev.vic.gov.au or 03 5833 5266.