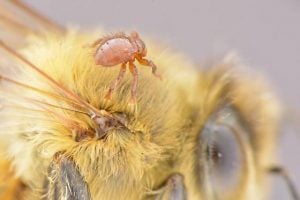 What do you call a fly with no wings? A walk.

Braula coeca is just that, a fly without wings, and it is often incorrectly referred to as a louse.

Braula can be mistaken for Varroa or other parasitic mites, as they are a similar colour and length, however Braula is only half the width of Varroa and has 6 legs rather than 8.

Adult Braula settle on the junction of the thorax and abdomen on adult bees. They have a particular affinity for queens; some queens have been seen to have up to 20 adult Braula flies living on them, with no apparent ill effect. To feed, they move to the bee’s mouthparts and steal food while they are either taking food from another bee or feeding another bee (trophallaxis). There is some evidence that the fly can induce regurgitation in bees by stroking their mouthparts until the bee extends its tongue.

Braula coeca fly lifecycle
The time taken for each stage is temperature dependent.

Female adults lay eggs everywhere, but the eggs only hatch when laid on stored honeycomb. The larvae tunnel under capped honey to feed. The length of the lifecycle is temperature dependent. Adults can live for several months, but less than a day without an adult host. 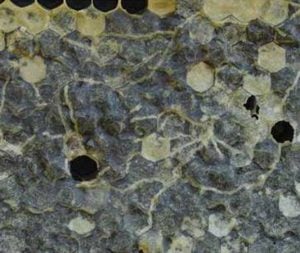 Braula can be diagnosed through observation of adults on honey bees or observations of larval tunnels in honeycomb. Methods to detect Varroa mites will also work on Braula: alcohol washes or sugar shakes of adult bees.

Braula has little economic impact. The larval burrowing causes aesthetic damage to honeycomb which may reduce its value when sold or shown in this form. However, most honey is extracted for sale. The safest and most effective treatment is to freeze honeycombs for at least 48 hours. This will kill all life stages.

Currently in Australia, Braula is present only in Tasmania. It is a notifiable pest in other states. If you suspect you have Braula contact the exotic plant pest hotline on 1800 084 881.