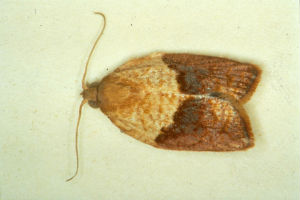 The date used to initiate accumulation of degree days (units of measurement for insect growth) in order to estimate when particular life stages of the pest will occur. For codling moth and oriental fruit moth the biofix is the date in spring on which moths emerge and are caught in pheromone traps. The initial emergence can be sporadic and to avoid reacting to the occasional early developer it is more practical to use the start of regular capture in traps as the biofix. There is no need to observe the traps every day in spring and once a week is sufficient. If your traps have caught moths for 2 or more consecutive weeks your biofix will be the day after the traps recorded the last zero catch.  For example, if the trap recorded zero moths up until 10th October and then the next two weeks recorded capture of moths the biofix would be 11th October.

Codling moth has a built-in safety mechanism to cater for variable spring weather and biennial bearing of its host trees. Some codling moth larvae hibernate for 2 winters (ie skip a fruit season) and others do not break their hibernation in spring until the day-length has reached 14 hrs. This latter group are called the second cohort and their biofix date is generally easier to determine than that for the first cohort that emerge in early spring. The date on which day-length reaches 14 hrs depends on the latitude of the district. Lower latitude districts such as Tasmania and southern Victoria reach 14hr day-length earlier than districts such as Stanthorpe in Queensland. Once day-length has reached the critical 14 hr the larvae pupate in preparation for transformation to the adult moth. This means that biofix can be predicted to occur after 100 degree days (DD) have accumulated from the date when day-length reached 14 hrs. [See article on second cohort for dates at which 14 hr daylength occurs: Codling Moth Emergence]

LBAM are native insects and do not diapause (hibernate) over winter and there are often large numbers of moths caught in the traps when they are set in September before deciduous fruit trees have leaves present, so the first rise in moth numbers after green tip stage of tree growth is used to set the biofix.

Predictions of spray dates are based on the degree days (DD) at which critical insect growth stages occur. In all cases the start of egg hatch for each generation or in the case of codling moth, each cohort within a generation, is used as a guide. The predictions generated by computer models usually indicate the first spray and then suggest how long a period effective cover is required to control that generation.