The Urban Plant Health Network Community of Practice is made up of industry and government experts in plant biosecurity, general and targeted surveillance, and entomology. Together they have identified six of Australia’s top exotic plant pests to be the focus of our pest awareness activities. The six pests listed below are top priority plant pests which pose a threat to both Victoria’s horticulture industries and urban gardeners. You can find further information about all of Australia’s top plant pests at the Department of Agriculture, Water and Environment.

The Asian Citrus Psyllid (ACP) is a sap sucking insect with a mottled brown body and a light brown head. Forewings are a light mottled brown colour with a darker brown band extending around the outer edge of the wing. Antennae have black tips with two small light brown spots in middle segments on each antennae. They are approximately 2-3mm long, a similar size to aphids. ACP has a distinctive feeding stance with head down and body raised at a 45 degree angle to the leaf surface. They are often found on the underside of leaves and will jump at the slightest disturbance. ACP can cause distortion of new growth, but is also a known vector of the destructive citrus pathogen, Huanlongbing.

Read our article about Asian Citrus Psyllid and listen to the podcast episode about keeping citrus trees healthy in Melbourne. 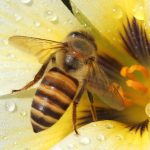 All exotic bees are a threat to native and honey producing bees in Australia. Asian Honey Bees are approximately 10-12mm long, smaller in size than European Honey Bees. They have prominent abdominal striping which alternates between black/brown and yellow, which are evenly spaced. They have less hair on the thorax which makes them appear to be darker in colour and glossier than the European Honey Bee, but with a slightly more pointed and slender abdomen. Asian Honey Bees tend to be more rapid and erratic in flight and when feeding, while European Honey Bees forage much more slowly and calmly. The will appear in small and orderly swarms, with bees arranged uniformly and all facing the same direction.

Read our article and listen to our podcast episode on keeping backyard beehives healthy and free of disease. 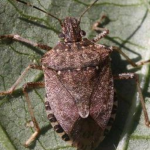 The most commonly known ‘hitchhiker pest’, Brown Marmorated Stink Bugs are between 12-17mm in length and have a ‘shield’ shaped body. They are a mottled reddish-brown colours, with white and black banding around the outer edge of the abdomen. Their antennae consist of five segments, with distinctive alternate black and white banding on the last two which appear in both adults and nymphs. Brown Marmorated Stink Bugs tend to aggregate together, rather than appearing as solitary individuals like other stink bugs, and will hitch their way to Australia on imported cargo, such as inside shipping containers of cars and machinery. They will produce a very unpleasant odour when disturbed or squashed – hence the name ‘stinkbug’!

Read our article or listen to the podcast episode about Brown Marmorated Stink Bug for further information.

Glassy-Winged Sharpshooter is a known vector of the number one exotic plant pathogen, Xylella fastidiosa. Adults are 12-14mm long and projectile-shaped, with a large flat head tapering towards the front with prominent eyes. Wings are transparent with reddish veins, but appear dark due to body colouration under wings of dark brown speckled spots. Body colouring is a light creamy colour on the underside. Glassy-Winged Sharpshooters lay their eggs in clusters of 8-10, side by side, within the epidermis layer of the underside of leaves, appearing as a greenish blister on the leaf.

Listen to the podcast episode about Xylella fastidiosa. 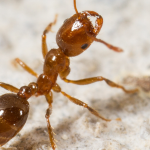 Exotic to Australia, although currently found in south-east Queensland, Red Imported Fire Ants are 2-7mm long, dark-reddish brown with a darker abdomen and have 10 antennal segments. Hair covers their entire body and a stinger easily visible on the abdomen. A prominent characteristic of the Red Imported Fire Ant is aggression, particularly close to the nest, and it’s ability hold onto skin with pincers and sting multiple times. Their nests are unlike normal ant nests as there is no visible entry point, likening the nest to a soft mound of dirt. These ants are extremely clever and have what is known as ‘collective intelligence’ which allows them to work together as a team!

Read our article or listen to the podcast episode on Red Imported Fire Ant for more information on this pest. 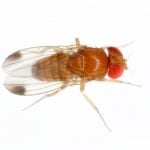 An exotic fruit fly which favours soft-fleshed fruits such as berries, cherries, grapes, nectarines and plums. Spotted Wing Drosophila are 2-3mm long, light yellow-brown in colour with red eyes, and unbroken bands across their abdominal segments. They are similar in size to common vinegar flies which you may find around your compost bin. Males have one dark spot at the tip of each wing along the first vein and females have serrated ovipositors, which are longer than other vinegar fly species. Spotted Wing Drosophila have a short life span, and in some conditions are able to develop from an egg to an adult in a week, and capable of having multiple generations in a growing season.

Read our article for further information on the Spotted Wing Drosophila.

Check out our Pest Warrior comic and our Top Six Pests activity book for some great resources to teach school children about our six exotic pests and using the MyPestGuide Reporter app to report anything unusual in the garden.

If you find something unusual in your garden – upload a photo to the MyPestGuide Reporter app or report it to the Exotic Plant Pest Hotline on 1800 084 881.