How does a hydrogen fuel cell work?

Hydrogen fuel cells are being touted as a promising technology to help reduce greenhouse gas emissions, particularly in the transport sector. Hydrogen fuel cells use the chemical energy stored in hydrogen to produce electricity, with only water and heat as by-products.

So how does a hydrogen fuel cell work? A fuel cell has a negative electrode – an anode, and a positive electrode – a cathode, which sit either side of an electrolyte. Hydrogen is fed into the anode and air is fed into the cathode. A catalyst at the anode separates hydrogen molecules into protons and electrons, which take different paths to the cathode. The electrons go through an external circuit creating an electric current which can be utilised. The protons migrate through the electrolyte to the cathode, where they unite with oxygen and the electrons to produce water and heat. 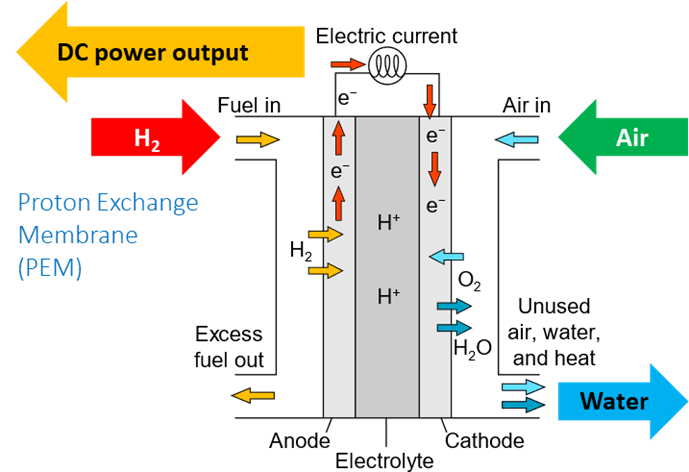 There are various types of fuel cells with different characteristics and applications. For example, polymer electrolyte membrane, also referred to as proton exchange membrane, (PEM) fuel cells use a solid polymer as an electrolyte and porous carbon electrodes containing a platinum or platinum alloy catalyst. PEM fuel cells have the advantage of low weight and volume compared to other fuel cells and are therefore more suitable for vehicle applications.