These REZs will play a vital role in delivering affordable, reliable energy generation to help replace the State’s existing power stations as they come to their scheduled end of operational life.

The Central-West Orana, New England and South-West REZs will unlock a significant pipeline of large-scale renewable energy and storage projects, while supporting up to $20.7 billion of private sector investment in our regions and over 5,000 construction jobs at their peak.

How do Renewable Energy Zones work?

Renewable Energy Zones (REZs) are modern-day power stations. They combine renewable energy generation such as wind and solar, storage such as batteries and high-voltage poles and wires to deliver energy to the homes, businesses and industries that need it.

By connecting multiple generators and storage in the same location, REZs capitalise on economies of scale to deliver cheap, reliable and clean electricity for homes and businesses. 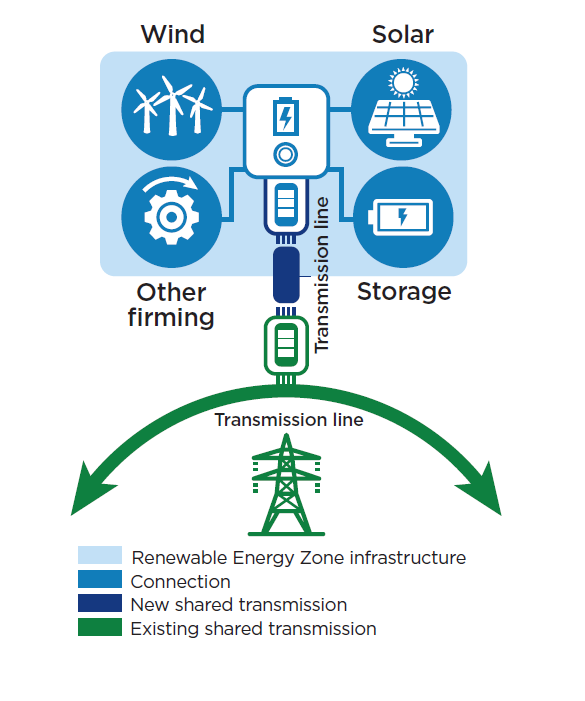 What are the benefits of Renewable Energy Zones?

The REZs are expected to deliver multiple benefits including:

The NSW Government is in the planning stage for the State’s first pilot REZ in the Central-West Orana region around Dubbo and Wellington on the land of the Wiradjuri, Wailwan and Kamilaroi people.

This REZ is expected to be shovel-ready by the end of 2022, unlocking up to 3,000 megawatts (MW) of new electricity capacity by the mid-2020s, bringing up to $5.2 billion in private investment to the Central-West Orana region by 2030. This is enough new capacity to power around 1.4 million homes. This REZ is expected to support around 3,900 construction jobs in the Central-West Orana region at its peak.

The Central-West Orana region was chosen for the pilot because it benefits from relatively low transmission build costs, due to its proximity to the existing backbone transmission network, a strong mix of energy resources and significant investor interest.

For more information about NSW Renewable Energy Zones can be found here. 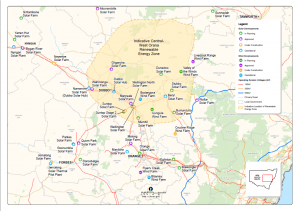