You have probably heard that the honey bees of Kangaroo Island in South Australia are a special breed of ‘Ligurian’ Italian bees. Liguria is the coastal region of Italy nearest to France and Monaco. History has it that Black Bees, likely from England, were introduced to Kangaroo Island in the early 1800s. Italian bees were introduced much later in the 1880s. Some of these latter introductions came directly from Italy and indirectly via Brisbane. The bees from Brisbane may have mated with Black drones, which were common all over Australia at the time.

The ‘Ligurian Bee Sanctuary’ was proclaimed in 1885 by an Act of the South Australian parliament, in order to maintain the purity of the Italian bees on Kangaroo Island, and to establish a breeding program for Italian bees. To this day the sanctuary is maintained to protect the bee’s ‘pure’ genetics and to prevent diseases spreading from the mainland to the island.

Consistent with the history of bee introductions to Kangaroo Island, past genetic studies have shown that the bees of Kangaroo Island may not be pure Italian. Part of the KI bee’s genome, known as the ‘mitochondria’, is only found in bees from Western Europe, the home of ‘black’ bees. Confusingly however, the bee’s body colour and wing veins are more similar to yellow Italian bees from Italy than to bees from anywhere else. 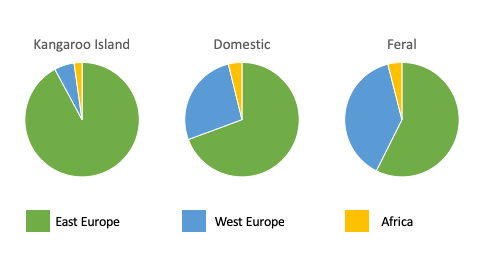 Figure 1: Genetic makeup of honey bees on Kangaroo Island, and the Australian domestic and feral populations as determined by a genetic test that assigns ancestry to Africa and East and West Europe.

New genetic research at the University of Sydney has now resolved the puzzle of the purity of KI bees. The research supports a hybrid origin of black and yellow bees, but with an overwhelming preponderance of Italian heritage in the genes that count most – those from the nucleus. The study used a genetic test originally developed with funding from AgriFutures Australia to detect Africanized killer bees at Australian quarantine. The test assigns ancestry to Western Europe, Eastern Europe and Africa. Apis mellifera ligustica, the Ligurian or Italian bee, belongs to the Eastern European lineage. The bees of Kangaroo Island have 90% Eastern European ancestry on average, consistent with them being of Italian heritage. Across the rest of Australia, the domestic population has 70% Eastern European ancestry. That is, KI bees are likely the most pure Italian bees in Australia. The feral population is 57% Eastern European ancestry (i.e. the ferals we have sampled are 43% black on average; see figure 1).

Further good news for the beekeepers of Kangaroo Island is that measures of inbreeding were low, pointing to a genetically healthy population.