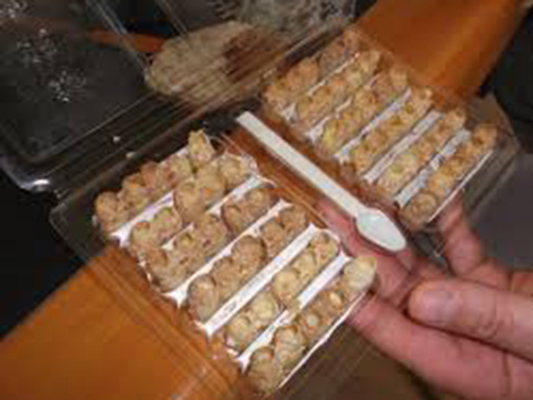 Royal jelly is what makes a queen bee a queen. Larvae that are destined to become queens are fed with a large quantity of royal jelly, rich in protein. Worker larvae are fed a smaller amount of a less nutritious diet – bee bread. This change in diet alters the developmental pathway of queens, resulting in a larger, more highly-reproductive individual.

Royal jelly is used in health supplements and cosmetics. There is little scientific evidence of beneficial effects in humans. Nevertheless, the wholesale market is worth $US135 million. The biggest consumers are China, Japan, Europe and North America. There are claims that products falsely claim to be produced in Australia, utilizing the reputation of Australian products as being higher quality in order to command a higher price.

How is royal jelly produced?

Royal jelly may be harvested through artificial queen rearing procedures. Larvae between 12-36 hours old are grafted into artificial queen cells and introduced into a ‘cell feeding’ colony. These cell feeding colonies are stimulated to produce queens through supplementary feeding, the absence of a queen or the presence of multiple queens. After 3 days the queen cells are taken from the colony, the larvae are removed and 0.3-1.0g of royal jelly can be harvested per cell.

The difference in labour costs between Australia and the major royal jelly-producing nations have been identified as a barrier to Australian producers. A new technology, developed in China, reduces the two most labour-intensive steps in royal jelly production: grafting larvae and harvesting the royal jelly.

An AgriFutures Australia study investigated the cost-effectiveness of royal jelly production using this technology in Australia.

Even with the new technology the estimated break-even cost is $520/kg which is 75% more than the retail price of Chinese-produced royal jelly sold in Australia. Although a verified Australian-produced product can be expected to command a premium, it is unlikely to be large enough to cover the costs of production.