Varroa has not yet established in Australia. In the advent that it does establish, beekeepers need to be aware of the available control methods. Chemical treatments have several drawbacks. Miticide residues have been reported in honey and bees wax, mites can become immune to the miticides, and their use prevents bees from being selected for natural resistance mechanisms. 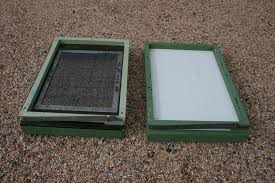 There was little difference in internal hive minimum and maximum temperature between the two treatments (<0.5oC). Relative humidity may be a few percent higher in colonies with screened bottom boards. These results are similar to a study conducted in Spain.

The hives with screened bottom boards gained 15% more weight than those with conventional bottom boards, though there was no statistical difference between the treatments. Another Australian study also found that honey production was not affected.

The use of screened bottom boards will also enable ventilation when moving hives or shutting them up during crop spraying.

If you would like to test out screened bottom boards in your operations start with buying 10. Consider requeening these 10 colonies and another 10 colonies with sister queens. Monitor the colonies over the season to see how the colonies perform.