The queen is dead. Long live the queen. 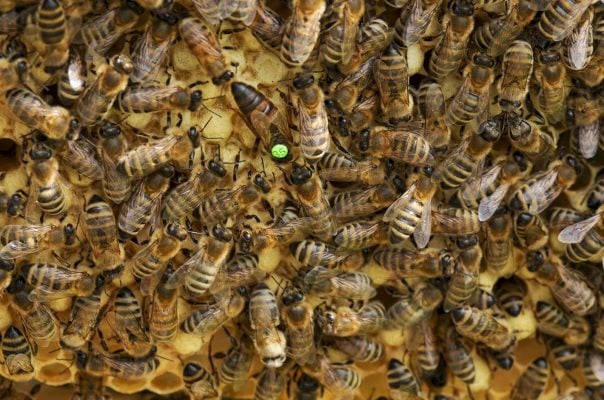 The queen is the most important individual in a honey bee colony. Having young, quality queens is an easy way for beekeepers to maximise their hive populations and get the most out of available nectar flows.

Queens should be replaced every 1-2 years and more frequently if the colony is aggressive or performing poorly. Older queens are more likely to lay fewer eggs and may run out of semen, resulting in poor brood production and smaller colony populations. Older queens’ pheromone profiles are also not as effective at preventing swarming, inhibiting ovary activation in workers and stimulating foraging behaviour in workers.

Based on surveys from the 1990s, Benecke (2003) concluded that more than half of beekeepers in Australia fulfil their need for queens by rearing most or all of them themselves. Whether you are rearing your own queens or purchasing them, it is important to select the best colonies to graft from. For a guide to rearing queens see AgGuide: Queen Bee Breeding.

Be aware that fewer drones may be available in early spring and autumn. If the queen does not mate with enough drones this will impact on the colony. The number of mates has been associated with honey production and colony survival. Queen producers can use management methods to increase the number of drones at these times.

The age of the queen when she is taken from the colony for sale makes a difference to survival rates. Those caught and sold at either 21 or 28 days old were more likely to be alive after 2 weeks and 15 weeks than those that were caught at 14 days old. Most reputable queen producers only sell queens that are at least 21 days old and have been assessed for laying quality.

Consider what traits you want your bees to have. Find out what traits queen producers are selecting for. Practically every queen producer selects for honey production and temperament. Other traits that are commonly selected for are low disease incidence, hygienic behaviour, ability to build-up population size quickly in spring, over-wintering ability, low swarming frequency, low burr or brace comb, worker body size and colour.

About the author Nadine Chapman