Urban growth is critically linked to biosecurity risk, however the extent of this risk is not well understood and efforts to engage urban dwellers in biosecurity best practices are few. Ninety percent of Australian residents live in urban areas, mostly on the Eastern seaboard. For such a heavily urbanised society, a lack of research and extension in this space leaves both city and rural communities open to the impacts of exotic pest incursion.

Melbourne is the fastest growing city in Australia, and in 2035 it is forecast to reach over 6 million people. At the current rate of growth, in 25 years Melbourne will become the most populated city in Australia. In such cities undergoing a high rate of growth, local planning has a view to resilience in the face of future mega shocks and chronic stressors such as increasing pollution, heatwaves, unstable energy supply, disintegration of social cohesion, and pressures on natural assets. Creating ‘urban forests’ to boost resilience in the face of these megashocks is widely accepted as a necessary strategy to increase resilience, as is the protection of green wedges and peri-urban agribusinesses. (41% of Melbourne’s fresh produce is currently grown within 100 kilometres of the city and protection of peri-urban agribusinesses is essential to maintaining a strong supply chain for the city.)

The recently developed Plan Melbourne 2017-2050 strategy states “Agricultural production in green wedges and peri- urban areas is vital to Melbourne’s long-term food security due to its proximity to markets, access to infrastructure and labour, and quality soils. Agricultural areas are also important agrifood tourism destinations as well as acting as green buffers for urban areas.” This plan also has a strong focus on creating the ’20 minute’ neighbourhood, where green spaces/natural spaces are central.

Further, a number of local councils are promoting urban greening through development of urban forest strategies, and in a bid to boost food security and social cohesion, two Melbourne local councils have developed urban agriculture strategies. It is likely that where Melbourne leads in the area of building city resilience other Australian cities will follow. 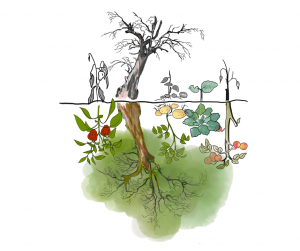 Urban forests and urban agriculture will benefit the city in many ways, however these initiatives will also lead to greater entry, establishment and incubation points for exotic pests. Further, increasing trade through the Port of Melbourne, and increases in short term passenger arrivals through Melbourne airports will stretch government biosecurity personnel in their ability to screen products and people at border check points. Apart from government activities there is no coordinated early detector network in Australian urban areas and policy documents such as Plan Melbourne make little mention of activities to reduce biosecurity risk.

The risk posed by lack of exotic plant pest surveillance in urban environments was highlighted by incursion and establishment of the Tomato Potato Psyllid in the Perth metro area and, subsequently, surrounding production regions. Over the following 12 months the downstream impact on horticultural industries throughout Western Australia due to domestic trade restrictions and increased production costs led to severe financial impacts for producers. Early detection of this psyllid in the metro zone would have increased the chance of eradication or containment.

In addition, those who live in cities stand to lose out if green wedges, peri-urban agribusinesses and natural areas experience the impacts of exotic pest establishment. The cities of the future, particularly Melbourne, will have a greater than ever need to preserve close proximity fresh food supply and protection of natural green spaces. Greater reliance on interstate and international produce will expose the city and its inhabitants to longer supply chains that are more vulnerable to shocks such as severe weather, currency fluctuations and political unrest.

This project will also seek to identify the most effective methods of launching and maintaining an early detector network for exotic agricultural plant pests in urban environments using citizen scientists, with Melbourne acting as a case study city.