A New Zealand perspective on botanic gardens and biosecurity

She outlines the role of the internationally coordinated surveillance efforts of the International Plant Sentinel Network with which a number of New Zealand and Australian botanic gardens and arboreta are involved.

It is the experienced staff of botanic gardens who enable surveillance programs to be successful. Bec writes that “staff expertise enables the identification of potential new threats…[and] quickly recognise it as something new and concerning”. She goes on to say that “because Botanic Gardens staff are often also knowledgeable about horticultural cultivars, describing impacts on those is useful to the nursery industry, as well as biosecurity agencies managing incursions”.

There are several pests identified in the article which have been detected in New Zealand Botanic Gardens. These include Japanese holly fern mottle virus at Auckland Botanic Gardens and significant range extensions of bamboo moth in Wellington Botanic Gardens. It is these types of finds as part of sentinel surveys which justify the effort which goes into undertaking them.

Bec also discusses the continuing surveillance efforts for myrtle rust in New Zealand to help understand extensions of host range, especially amongst New Zealand native plants. This is a role which botanic gardens are well suited to because often a number of species of one genus are planted closely together and nearby other potentially susceptible genera, enabling rapid determination of susceptibility which might not be possible in remote locations. 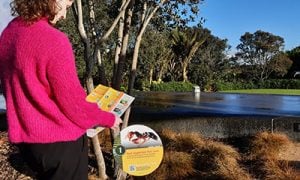 The role of botanic gardens in educating and engaging visitors is also covered in the article, with a focus on the Auckland Botanic Gardens biosecurity trail. The 1.8km loop features 12 plants with interpretation signs which raise awareness of potential new threats to these plants. The sign for brown marmorated stink bug, for example, is situated close to the Edible Garden to highlight the potential impacts on agricultural and horticultural industries as well as home gardens. Bec explains that “the trail engages visitors to be aware of these pests should they arrive and to keep lookout for them, but it also highlights the importance of them playing their part in not bringing these pests (intentionally or accidently) to NZ when they travel”.

Bec’s article was published in the Hort Journal Australia in May 2020. To read the full article visit https://hortjournal.com.au/backissuedisplay.php?issue=May2020 (pages 12 and 13)