Have you seen stink bugs congregating?

Brown marmorated stink bug (BMSB) is high on Australia’s radar of exotic pests. While Australia remains free of BMSB, the stink bug has been intercepted many times at the border over recent years. 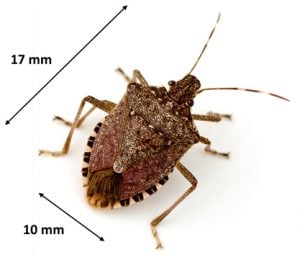 Stringent biosecurity measures employed by the federal government, including offshore treatment of cargo, has encouragingly seen a reduction in interceptions.

Despite strict biosecurity measures and inspections at the border, BMSB may slip through the biosecurity net from time to time. If a pest breaches the federal border, the state government and community have a responsibility to detect and report these exotic pests.

Stink bugs overwintering on buildings and inside homes

BMSB is considered a nuisance pest due to the large numbers congregating (sometimes thousands) and invading houses, buildings and other structures whilst also emitting an offensive odour. During warmer parts of the year, BMSB can be found feeding on the reproductive parts of plants. As the weather cools however in autumn and through winter, BMSB adults undergo diapause and seek safe overwintering sites, often favouring human-made structures such as buildings, houses and cargo. The association with cargo makes it an adept hitchhiker and has been implicated in its rapid spread across the globe. BMSB is difficult to control, especially during the overwintering phase.

Watch out for stink bug gangs!

It is important for the community to remain vigilant throughout the year for exotic pests such as BMSB. At this time of year (autumn and winter) BMSB would be expected to start congregating on and in structures to prepare for overwintering. No native stink bugs in Australia behave this way, so if groups of stink bugs are found together, a closer inspection is warranted.

BMSB adults congregating on the door of a house
Image: Creative Commons

What can you do?

If you notice congregating stink bugs, take a photo and upload to MyPestGuide Reporter app or website. Select ‘Make a Report’ and choose ‘Peri-urban Environmental Biosecurity Network’ from the ‘Send Report to’ list.

Alternatively, they should be reported to your state agricultural department or via the Exotic Plant Pest Hotline on 1800 084 881. In NSW, report sightings to the NSW Department of Primary Industries, either via the hotline above or email biosecurity@dpi.nsw.gov.au.

Importantly, if in doubt, still report. Reports that don’t turn out to be exotic pests still provide useful data that underpins pest-free status in many areas of agriculture.

This article was written by Rachel Taylor-Hukins and peer-reviewed by Louise Rossiter and Megan Powers.