Today there are two honey bee species that call Australia home: the European honey bee (Apis mellifera), introduced for beekeeping in the 1820s, and the Asian honey bee (Apis cerana) which was accidentally introduced to Far North Queensland (Cairns) sometime around 2007 and has established a feral population in that region.

Asian honey bees are close relatives of European honey bees and share many aspects of their behaviour: they nest in cavities, are generalist foragers, pollinate many of the plants they forage on and, of course, make honey. Indeed, they have been used for traditional bee-keeping in Asia for centuries.

Overall though, they are far less amenable to commercial bee-keeping than European honey bees. This is because they hoard comparably modest amounts of honey (particularly the tropical varieties), swarm frequently and readily abscond if disturbed. In fact, these latter traits seem to be particularly exaggerated in the invasive lineage of Far North Queensland, and may have contributed to the successful establishment of the population.

What risks do Asian honey bees pose to Australian beekeeping? 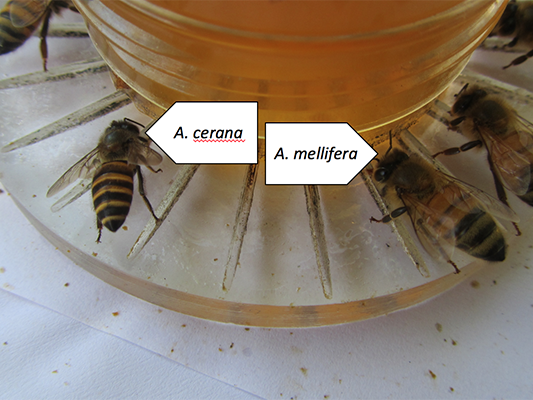 The greatest risk of an incursion comes through swarms on shipping containers. The National Bee Pest Surveillance program acts to detect such incursions.

Yes, but quite slowly. The Australian population of Asian honey bees is currently confined to a region of Far North Queensland centred on Cairns and the Atherton Tablelands. Researchers at The University of Sydney have conducted a “genetic post-mortem” on this invasive population and conclude that it was likely founded by the introduction of just a single swarm! This tells us that Asian honey bees pose a very significant biosecurity challenge, because even one swarm has the potential to initiate a new population. The good news though is that the current invasive population is highly inbred compared to populations in their native range, which is helping to slow its rate of spread.

In the absence of any new incursions, or any accidental long-distance relocations, Asian honey bees are likely to remain confined to Northern Queensland for quite some time.

Asian honey bees in Australia and how we determine just how big the population is. (Narrated by Ros Gloag)