Australia is the lucky country, particularly for beekeepers.

Around the world, the beekeeping industry has been devastated by the ectoparasitic mite Varroa and the diseases that it spreads. But Varroa has not yet established in Australia. 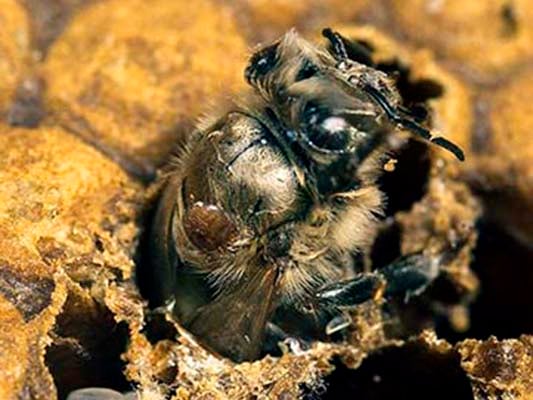 Varroa reproduce in the brood cells of honey bees, the mother laying one male and several female eggs per cell. The daughter-mites mate with their brother and feed on the developing honey bee. The female mites emerge with the mature adult bee to go on to reproduce on another developing honey bee. The mites also feed on the fat body of adult bees. Damage to the fat body contributes to poor nutrition, weakens the immune system, and impairs the ability to detoxify pesticides. Varroa also transmits viral diseases when feeding, further weakening the bees.

The Australian honey bee industry has been preparing for Varroa for a long time. One aspect of this preparation was to determine how susceptible our bees are to Varroa. Ben Oldroyd, from the University of Sydney, shipped 21-28 queens from each of seven lines of Australian honey bees to colleagues in America as part of an AgriFutures Australia funded study. There they compared the resilience of Australian bees to that of two strains selected for resistance to Varroa, and one strain that has not been selected for resistance.

44% of Australian and non-resistant American colonies died between August and November. The majority of remaining colonies were dying. During the same period 4.4% and 14.3% of the colonies of the two American Varroa resistant lines died. The Australian stock carried significantly more mites per 100 workers than the resistant lines. The data suggest that the Australian lines all had similarly poor tolerance to Varroa.

If Varroa establishes in Australia it is likely to have a severe impact on honey bee colony numbers, both managed and feral. It is essential that we prevent this from happening. The National Bee Pest Surveillance Program acts as an early warning system to detect Varroa. Individual beekeepers can assist the program by performing hive inspections, as shown in the video, and adhering to the Code of Practice outlined by the National Bee Biosecurity Program.

Inspecting hives for the presence of Varroa, BeeAware