Honey testing: more to the story 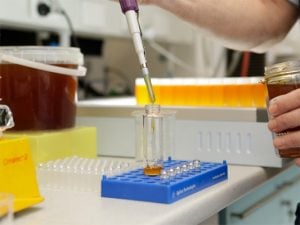 There have been a few media reports about honey adulteration in Australia in the past year. This has resulted in a 15-30% decrease in honey sales, translating to losses upward of $10 million. A recent AgriFutures Australia study reports that there are inherent problems with the methods used in these studies.

Honey is composed mostly of sugars, predominantly glucose and fructose with some sucrose. It also contains small amounts of a range of other substances including larger sugars, proteins, vitamins, amino acids and minerals. The levels of different sugars in honeys vary, mainly influenced by the floral source.

Various tests analyse different aspects of honey, including sugars, protein and electrical conductivity against a database of ‘typical’ honeys. One problem is that the databases used in these tests contain very few samples of Australian honeys. Australia has many unique plants, which may result in honey that does not conform to the ‘standard’’ honey produced elsewhere. For example:

Therefore, Australian honeys can be incorrectly determined to be adulterated using the methods in place for other regions of the world.

The report made a number of recommendations to increase consumer confidence in Australian honey:

There are a number of articles online stating that you can test for honey adulteration at home via various methods. If this were the case, the world-wide honey industry would not be investing millions in research to develop an accurate test. None of these methods work.

Australian beekeepers are proud of the quality of their honey, as they should be. Australia has some of the best honey in the world. The unique flora of our country provides a vast array of honeys, some of which fail current testing methods due to their particular chemistry, rather than due to adulteration. Please continue to support the Australian beekeeping industry by buying 100% Australian honey.

About the author Nadine Chapman