Should growers pay for pollination services?

The short answer is yes. But how do we know that?

Firstly, growers of any crops that rely on honey bees for pollination need to know how many feral hives are in their area. Why should they pay for beekeepers to bring hives to their orchards if there are already enough honey bees living in the area?

The problem with this is that feral honey bee colonies aren’t always easy to find. They can nest in all kinds of out of the way places, most notably up high in trees. It’s no easy task to work out how many may be within flight range of an orchard, as it’s not practical to just go out and count them. 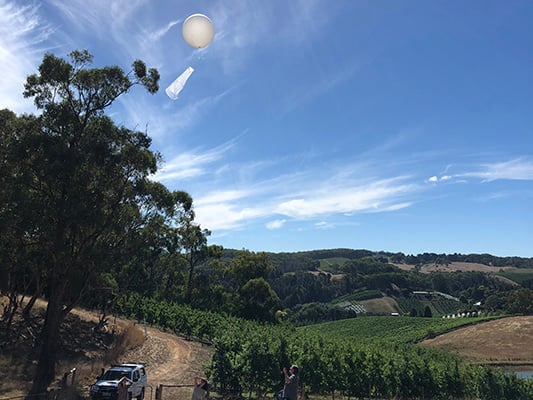 Luckily, researchers from the University of Sydney have worked out a way to quickly estimate the density of honey bee colonies in an area – by letting them come to you. The method works by deploying a Williams drone trap – a weather balloon with a conical net suspended underneath. The net contains lures soaked in queen pheromone. Fly this on an orchard, and every sexually mature drone that can smell it will soon show up, thinking they will have the chance to mate with a particularly enticing queen. Instead they get caught in the trap, and are brought back to the lab for analysis.

Using genetic markers, we can work out how many of the drones in the trap are brothers. In other words, we can infer how many queens produced them. Since we know there will only be one queen per colony, once we know how many mother queens there are, we have an idea of how many colonies are in drone flight range.

We know that drones typically fly up to 3.75km when searching for a queen to mate with. We then use this distance as the radius of a circle, the centre of which is where we deployed the trap. High school maths tells us that the area of this circle is about 44km2. So if our genetic analysis showed that the drones were produced by 100 queens, over an area of 44km2, we now know that there are about 2.27 honey bee colonies per square kilometre. 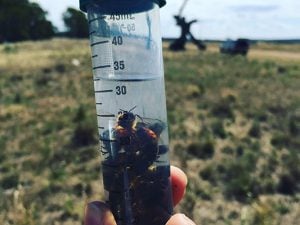 So, should growers pay for pollination?

Therefore, it is definitely worthwhile for the majority of growers of pollinator-reliant crops to pay for pollination services. And this further highlights what we already know – that keeping our bees healthy and the honey bee industry strong will continue to prop up a large number of Australian plant industries and allow prosperous harvests for all.