There are at least four species of Tropilaelaps mites, all native to Asia. Two species are able to parasitize the worker and drone brood of the Western honey bee Apis mellifera. No Tropilaelaps have yet been established in Australia. Their current distribution is Asia, Papua New Guinea, Afghanistan and Kenya.

Tropilaelaps are a similar reddish-brown colour as Varroa, have the same length, but less than half the width (1mm long by 0.5mm wide). Immature mites are paler. Only 3-4% of adult mites are found on adult bees, with the remaining found within brood cells. 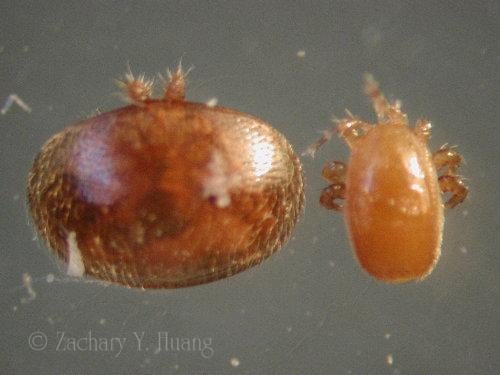 Both Tropilaelaps and Varroa were thought to feed on the haemolymph of honey bee brood. It has since been discovered that Varroa feeds on the fat bodies of brood, and it has not yet been confirmed that this is not the case for Tropilaelaps.

Parasitism of brood may result in deformed adults that are stunted with damaged wings, legs or abdomens. Tropilaelaps decreases the lifespan of parasitized bees. Other signs of a Tropilaelaps infestation include irregular brood patterns, perforated cappings and brood discarded at the entrance to the colony. Severely infested colonies may abscond. Tropilaelaps infestation may affect honey yield, increase virus transmission and susceptibility to wax moth, and can result in the death of the colony.

If you detect mites in your colonies please call the Exotic Plant Pest Hotline on 1800 084 881.

Tropilaelaps die within three days without access to brood because their mouthparts are unsuited to feeding on adult bees. This is in contrast to Varroa, which can persist for months without brood.

Tropilaelaps mites are less likely than Varroa to be detected using a sugar shake or alcohol wash method, due to the infrequency with which they are found on adult bees. The best means for detecting them is through the examination of capped brood or in floor debris.

Treatment options include the use of acaricides or removing sealed brood from colonies for at least three days.

Video: Tropilaelaps the WORST mite of HONEY BEES, Inside the Hive TV

If you detect mites in your colonies please call the Exotic Plant Pest Hotline on 1800 084 881.