Keep an eye out for hitchhiker pests in your online shopping

Are you spending your days doing online shopping as we edge closer to Christmas? Do you have family overseas who are sending presents to your family this silly season? Victoria’s Chief Plant Health Officer, Dr. Rosa Crnov, is encouraging you to check your online shopping for any hitchhiker pests. As we move into the lead up to Christmas, the threat from pests being introduced to Australia through imported goods increases, and the earlier an unwanted pest is reported, the better the chance of removing it or stopping it from moving to other places. Exotic plant pests can go unnoticed because of their small size, and can often be found in inconspicuous places, such as inside cardboard. Some pests can even arrive here as eggs which have been laid on imported goods. Brown marmorated stink bug, Khapra beetle, snails and other pests often come over in sea containers, but the threat is not just from overseas packages. Electric ants and fire ants can also hitch a ride to Victoria in domestic mail, and they can be very aggressive.

In the past, there have been detections of exotic pests in Melbourne. In November 2020 a Bayswater business emailed photos of a strange-looking bug to Agriculture Victoria after they discovered the insect in an airfreight package. The insect was confirmed as a brown marmorated stink bug. Luckily the report allowed a rapid and effective response to occur. Although Australia has strict import conditions for goods coming in from overseas through our ports and mail centres, sometimes things can go undetected. Australian farmers rely on freedom from pests and diseases to produce our food, and have clear access to both domestic and export markets. Communities also rely on freedom from some pests and diseases which can have an impact on the environment.

So what are some hitchhiker pests which are exotic to Victoria?

Brown marmorated stink bug (BMSB) (Halyomorpha halys) – BMSB likes to hide in dark, cool places. Shipping containers are a perfect place for them, often being found on machinery and cars which are imported from overseas. Although they can look similar to native stink bugs, there are some distinct differences. Read more about BMSB or listen to our podcast.

Khapra beetle (Trogoderma granarium)  – Khapra beetle is a pest which mostly threatens the grains industry, however these little guys can come into urban areas hidden in packaging. They can go for extended periods of time without needing to feed, and adults can even put themselves into hibernation if they don’t have a readily available food source. This means they can go undetected in packaging or in cracks, crevices and under floors of shipping containers. Read more about the Khapra beetle story.

Exotic ants – These ants are fearlessly aggressive, and give a very nasty sting to anyone who comes into contact with them. Red imported fire ants (RIFA) (Solenopsis invicta) and electric ants (Wasmannia auropunctata) are both found in Queensland, but can easily be transported to other states through plant material such as pot plants or soil. Read more about RIFA or listen to our podcast for more information about Queensland’s ongoing battle against RIFA.

Invasive snails – The giant African snail (Lissachatina fulica) likes to stow away on imported goods or packaging. This snail may move slowly, but it is a voracious feeder, which makes it one of the most damaging land snails. Occasionally these snails have been illegally imported as pets in other countries. Golden apple snails (Pomacea canaliculata) are freshwater snails which could spread rapidly through our creeks and rivers, feeding on aquatic plants and altering the ecosystems of our rivers. Any snail on an imported good should be reported to the See. Secure. Report. Hotline on 1800 798 636. Read more information about exotic invasive snails. 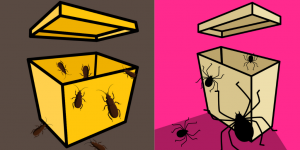 Exotic pests can hitchhike into Australia on parcels from overseas

What to do if you find something in your packages?

You can play a role in protecting Victorian farmers, environment and the community from biosecurity threats by reporting anything unusual. Early reporting increases the chance of effective control and eradication. Where your package arrives from determines the method used to report any suspect pests.

For imported goods, cargo or containers from overseas:

For any domestic goods or pests found in your backyard: