A look into the sex-determining gene in Australian honey bees

What is the complementary sex determiner and why does it matter?

Sex in honey bees is determined by a gene named the complementary sex determiner (csd). Unfertilised eggs emerge to become drones, whilst fertilised eggs become queen and worker bees. Like other genes, csd has numerous alleles. Alleles are different variations of the same gene.

With this system, it is possible that some fertilised eggs end up with the same csd allele from both their parents, becoming abnormal drones. Experimental studies from the 1950s have shown that these abnormal drones are killed during development and as such, if a large amount of fertilised eggs develop into non-viable drones, it can severely decrease population growth and result in unproductive colonies.

Honeybee sex determining system. A and B are different alleles (forms) of the same gene.

It is important that all honey bee populations maintain a high number of csd alleles to decrease the chance of a queen meeting a drone with the same allele copy as itself. A decrease in csd alleles can happen for several reasons, for instance in a closed breeding population if the queens are produced from a small number of colonies. Another reason is the rapid decrease of colony population size in a short period of time due to diseases or bushfires.

csd diversity in honey bee populations have been investigated around the world, but this had yet to be done in Australia until recently through the Plan Bee program.

The diversity of csd has been tested in two Australian honey bee populations, 56 colonies from Better Bees WA (BBWA) and 41 colonies from a NSW queen bee breeder. Our results show that BBWA had 28 different csd alleles, while NSW had 32. In total, we found 51 alleles, 12 that had not been previously reported worldwide. 9 alleles were found in both populations. As of 2021, there were 225 alleles worldwide.

Through comparing our results with those found in other breeding programs internationally such as Varroa Sensitive Hygiene (VSH), Russian Honey Bee (USA) and SmartBees (Europe), Australia’s csd diversity is comparable. Given the New Zealand breeding program have been maintained successfully with as few as 16 csd alleles, Australia’s csd diversity shows great promise.

This means that with the two populations tested, it can be inferred that low csd diversity is not currently a problem in Australia. 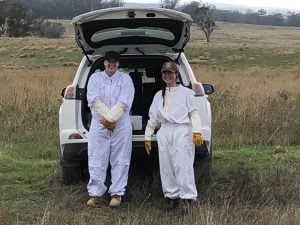 Whilst csd diversity may not currently be an issue, it is important to continue to track this over time. Plan Bee will be doing this in the breeding stock at Tocal Agricultural college.