The English black bee (Apis mellifera mellifera) was first introduced to Australia in 1822. Lugurian (A. m. ligustica) bees arrived in the early 1860s, Caucasian (A. m. caucasica) in the 1880s and Carniolan (A. m. carnica) in the 1890s. Lesser known imports were made of A. m. iberiensis, A. m. intermissa, A. m. lamarckii, A. m. cypria, A. m. syriaca. It is possible that other subspecies were also introduced; genetic studies have identified A. m. macedonica, although there is no historical report of their introduction.

Honey bees have been divided into at least 5 ancient lineages, as discussed in a previous article. An AgriFutures Australia study created a genetic test to determine honey bee ancestry to 3 of these ancient lineages; Western European (A. m. mellifera, A. m. iberiensis), Eastern European (e.g. A. m. ligustica, A. m. carnica) and African (e.g. A. m. scutellata, A. m. capensis). Note that although Carniolan bees are popular in Australia, the lineage that this subspecies belongs to was not included in the test. 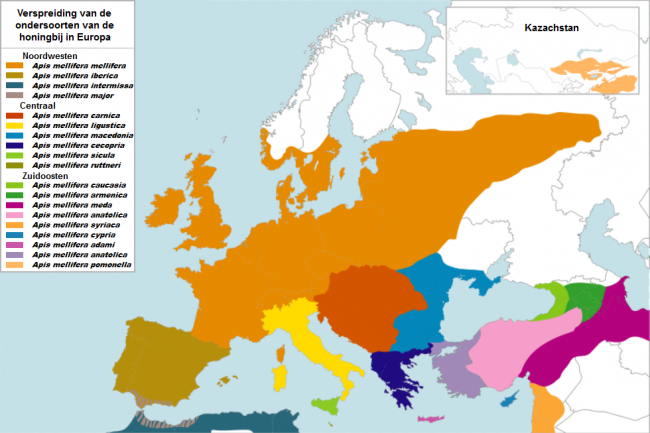 Distribution of the 5 ancestral lineages
Source: K. A Dogantzis & A. Zayed 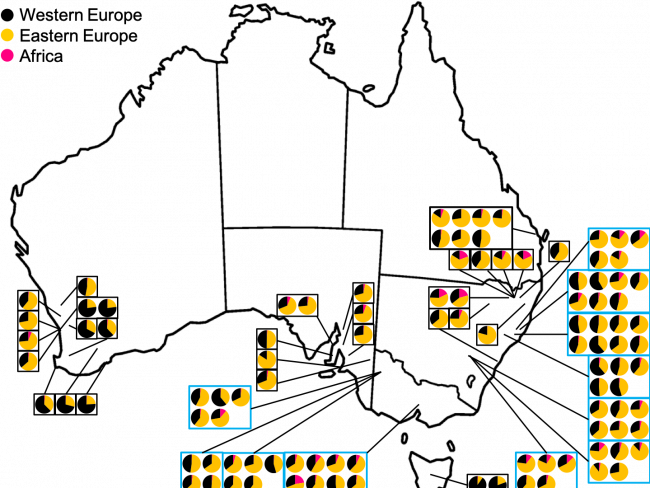 Ancestry of feral Australian bees to 3 ancient lineages. The samples outlined in blue are from drones collected at drone congregation areas.

Some bees had a fairly large amount of African ancestry. This may be from the small number of imports from northern Africa, where there has been ancient hybridization with bees from Spain and Portugal. Alternatively, it may arise from the test not including the lineage that Caucasian bees belong to. Similar levels of African ancestry were found in commercial populations from the United States and Canada.

Of particular note are the bees from the Tasmanian highlands, which had a very high proportion of Western European ancestry. It is well known that only black bees tend to be able to survive there.

In this presentation, Nadine Chapman discusses the genetic background of Australian honey bees

Should we care that our bees are hybrids?

I think not. As long as we are selecting for the best bees for our conditions and commercial requirements then we are setting ourselves up for success.