Varroa destructor is an ectoparasitic mite that feeds on adult and developing bees. This weakens the bees, reduces body weight, decreases flight performance, causes learning difficulties, and reduces life span. The mite also transmits viruses, which can have a wide variety of effects.

At each point in the Varroa life-cycle (Figure 1) the bees fight back to prevent Varroa populations from exploding. 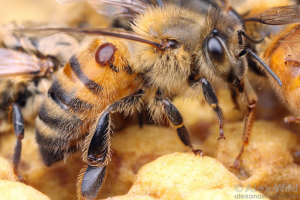 Varroa mite on a worker bee inside the hive. (Alexander Wild, The University of Texas at Austin)

The life cycle starts when the Varroa mite emerges from a brood cell. She must find an appropriate adult host. There is a preference for nurse bees. Mites that spend this period on foragers or very young bees are less fertile than those on nurses. At high mite concentrations this preference is lost. Mites on foragers are more likely to be transmitted to another colony.

During this period the bee can fight back by grooming mites off themselves and other bees. Mites can be damaged during grooming, or fall off and get stuck to the bottom of the colony. If the colony swarms then the new colony starts with only the mites that are on the adults. Colonies may also abscond, leaving all the mites in the brood behind.

Reproductive phase – in the brood cell

It takes 3 (on worker brood) to 5 (on drone brood) days for the mite to initiate reproduction. The first egg produced is unfertilized and results in a male. Thereafter the mother lays a fertilised, female, egg every 30 hours. The females mate with their brother when they are about 5-6 days old, unless more than one mite is reproducing in that cell, in which case they can outbreed.

In some populations a large proportion of mites are infertile. Signals (e.g. pheromones, nutrition) from the brood can prevent egg development, and there may be other as-yet unidentified mechanisms.

Workers, detecting a problem with Varroa-infested brood from brood pheromones, may place a hole in the wax cap (uncapping). This changes the temperature and humidity in the brood cell, killing the developing mites. Workers may also remove infested brood from the colony, known as Varroa Sensitive Hygiene (VSH). These actions prevent mite population growth.

Finally, reductions in the length of the post-capping period (the length of time the developing bee takes to pupate) mean that fewer mites have a chance to mature and mate before the bee emerges. In warmer parts of the world the bee brood cycle is shorter, and this may contribute to Varroa resistance in these populations.

So now you know how honey bees fight back against Varroa. How can we fight back?

How can we fight back?

The best strategy is eradication. It is important that everyone follows biosecurity guidelines to give us the best chance of achieving eradication. Eradication is achievable. Australia successfully eradicated Varroa jacobsoni from Townsville.

If eradication becomes unachievable then treatment and breeding will become important. The Plan Bee Breeding Manual will be updated in the coming months to include Varroa resistance traits.

In worker brood a foundress can produce 1-2 mature females per cycle. In drone brood they produce 2-3.

Lifespan varies depending on the time of year, from 25 days to 5 months. Typically, they can complete 3-4 cycles (Figure 2).