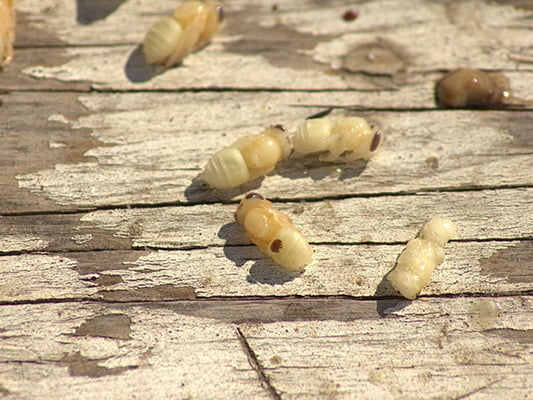 The Varroa destructor mite is a major honey bee pest throughout most of the world. Australia is the only major beekeeping country in the world to be free of the parasite. Varroa mites feed on the fat body of adult bees and developing bee larvae and reproduce under capped cells of pupating honey bee stages. Mites can compromise bees’ immune systems, transmit viruses, deform developing bees or kill them outright when multiple mites reproduce in a single brood cell.

While the application of miticides is the most common method of controlling varroa mite populations, it is only one part of the arsenal of techniques beekeepers should use in an integrated pest management (IPM) program. Other aspects of IPM to consider include monitoring mite levels within each hive to optimise timing of chemical treatments, following the dosage on the treatment label, rotating between different types of chemical treatments to prevent mite resistance, baiting mites with drone brood to be removed from the hive before it emerges (if managing few hives), and breeding for traits that result in a degree of mite tolerance (i.e. grooming behaviour, varroa sensitive hygiene, mite-biting).

Varroa destructor mite on the abdomen of the worker pupa in the foreground, removed from a heavily infested colony in North Dakota, USA.

Queen breeders like Rae Butler of Bee Smart Breeding in Ashburton, New Zealand, are selecting for the varroa sensitive hygiene (VSH) trait as an additional, non-chemical pest control tool. VSH is a behavioural trait of honey bees which gives them some degree of varroa tolerance. VSH trait selection increases bees’ ability to reduce levels of varroa through detection and removal of varroa from capped brood cells.

In the September 2017 edition of New Zealand Beekeeper Magazine, queen breeder Rae Bulter writes, “VSH bees have the VSH trait and are highly sensitive to the presence of varroa in the pupae. It is now surmised that the pupae give off a chemical cue which signals a varroa incursion.

VSH bees respond to the stressed pupae by uncapping the cells and removing the pupae, which in turn releases the varroa mites. VSH bees are also known to uncap and then recap pupae. This sometimes releases some of the invading varroa. The uncapping response is normally when the pupa is at the white, pink and purple-eyed stage, at which point the varroa mother would have had two to five offspring. The uncapping displaces the mother varroa and her offspring, who are at different stages of maturity.

A displaced varroa may be killed by adult worker bees, or may enter a new larval cell where the mother often cannot produce a normal family of offspring. These ‘nonreproductive’ mites are a key feature resulting from high levels of VSH activity.

In this way, the VSH bees are able to keep the mite population levels down by interrupting the life cycle of the varroa. VSH is a heritable breeding trait that can be selected and can be used in combination with an Integrated Pest Management Plan.

It is documented that many New Zealand bee colonies already have the VSH trait—so it may be able to be selected in your colonies along with other desirable traits that you have previously been selecting.

Butler’s VSH selection is an excellent tool to incorporate into a breeding program in a country where varroa mite is established, such as in New Zealand.

Podcast: For more from Butler, listen to her interview from the 2019 Apiculture NZ Conference.

Managing your hives, Pests and diseases