What difference does animal breeding make?

A breeding program for Apis mellifera carnica has been ongoing in Germany since the 1970s, expanding into surrounding countries. From 1970-1989 the program increased honey production by 0.11% and gentleness by 0.01% per annum (Table 1). 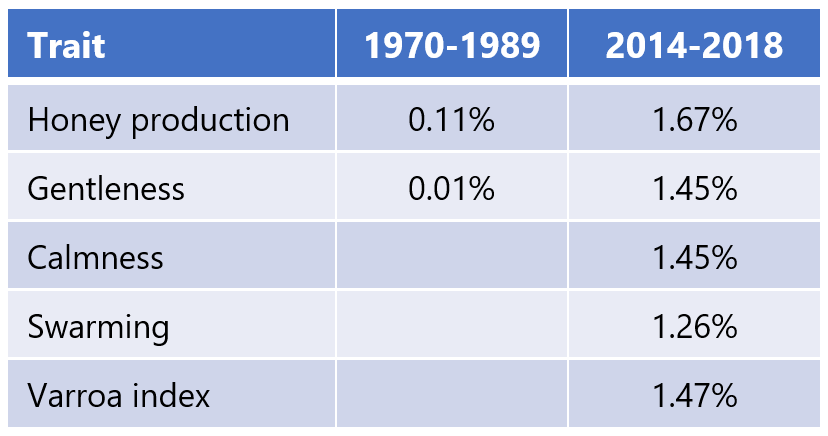 In the mid 1990s the program implemented the use of modern animal breeding techniques – computer based Best Linear Unbiased Predictions (BLUP) which take information on traits, genetics (pedigree or genetic testing), and environment (i.e. which animals are kept together in the same environment) to produce Estimated Breeding Values (EBVs). EBVs assign a number to each individual that represents its genetic merit. Individuals with the most favourable EBVs are chosen for breeding.

In 2014-2018 the rate of genetic improvement of honey increased by 15 times to 1.67% per annum. The rate of improvement in gentleness increased 145-fold to 1.45%. Similar progress was also seen in traits added during this time.

These figures out of Germany are based on real data. They too have fluctuations in resource availability. Some years less honey is produced, but it is more than would be produced if these selection methods were not being used.

What does this mean for you?

Say you produce on average 50 kg of honey per colony per year, and the price of honey is $5.00. This means each hive is worth on average $250 for honey. Using current practices that means that next year you can expect to produce 50.055 kg of honey, or $250.28 per hive.

At the end of 15 years using current methods your colonies would be producing 50.83 kg due to selection, while using EBVs you’d be producing 64.10 kg (Figure 1).

Over that 15-year period using current techniques you will have increased the total value of honey production by $33.17 per colony – that’s the sum of the extra honey produced by selection over 15 years.

Using EBVs you could increase the total value of honey produced over the 15 years by $542.25 per colony.

Multiply that by how many colonies you have, or by all the colonies in Australia and you can see the impact that modern animal breeding techniques can have on the Australian beekeeping industry. In fact, Banks and Boerner (2015) calculated that over 25 years EBVs would generate an extra $41 million in honey across the industry.