Tracking outbreaks of exotic diseases has never been more at the forefront of public thinking, and it’s important to remember that the honey bee industry may one day have to deal with the same situation.

Beekeepers are well aware of the threat Varroa poses to the honey bee industry in Australia. We are currently the only remaining country to be free of the pest and the diseases it spreads. But based on the experiences of beekeepers around the world, we know we need to be ready for the day Varroa makes it to our shores.

One important aspect of any Varroa response will be to know the densities of honey bee populations around Australia, particularly near the port cities where an incursion is more likely to occur. As we have seen with the current COVID-19 pandemic, the spread of a pathogen and how we respond to it is largely dependent on the density of susceptible individuals in an affected area. Diseases spread far more rapidly in densely populated areas.

This becomes particularly important for large-scale beekeepers that provide paid pollination services. During the annual almond pollination events in Victoria and South Australia, tens of thousands of colonies are brought to almond orchards from all over the country and kept in close proximity to each other. After the pollination period has ended, the colonies are returned to their usual locations. This means that if even one of these colonies is carrying Varroa mites when it is brought to an orchard, we could see the rapid spread of Varroa throughout the country following the pollination event. 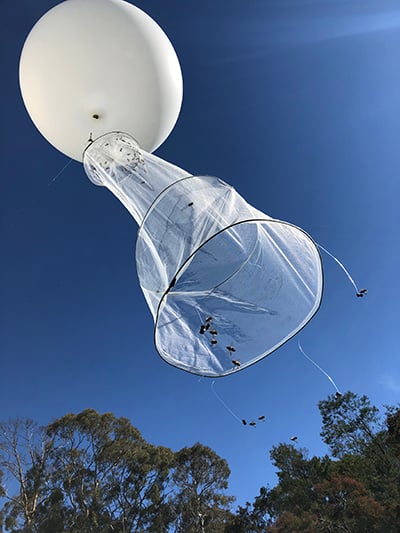 Drones are attracted to the trap with queen pheromone.
Photo by Nadine Chapman

This makes it even more important to know the densities of feral honey bees around the country, as Varroa could spread through these populations to areas it hasn’t yet reached. If we know an area is densely packed with ferals, we know it is an area we need to pay attention to in the event of an incursion. Conversely, if we know an area has a low density of ferals, efforts could focus on eradicating these ferals to isolate the infectious population.

Luckily, we now have methods to rapidly assess pollination densities in any given area – by deploying Williams drone balloon traps and catching drones. After genetic analysis, we know how many queens produced the drones and thus have an estimate of how many colonies are within a 3.75km radius, or an area of 44km2.

Researchers at the University of Sydney have already conducted these surveys at several important growing areas in Australia, including the Yarra Valley in Victoria and the berry-growing regions of northern New South Wales. We need to continue this work across Australia’s horticultural regions. This is the only way we can know which areas to focus on during a Varroa outbreak, and ensure Australia has the best possible outcome if and when that day arrives.

The Sentinel Hive Program safeguards the Australian honey bee industry and the horticultural industries that depend on them for pollination.

This article was written by Michael J Holmes and reviewed by Nadine Chapman and Patsavee Utaipanon.