With the Varroa incursion in NSW many beekeepers are asking how we can breed Varroa resistant bees.

The United States Department of Agriculture (USDA) imported bees from the Primorsky region of Russia in 1997 because the stock had a long exposure to Varroa and had developed resistance to the mite. 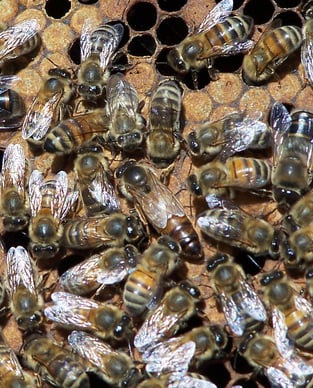 The imported stock was kept on an island for testing, with only superior stock being introduced to the mainland. Varroa resistance is the main criteria for selection, but honey production, tracheal mite resistance, and chalkbrood resistance are also considered.

Varroa resistance breeding in this program is based on mite population growth.

Mite population growth is measured by taking a sample of approximately 300 bees at the first inspection in spring and determining the infection rate with a soap or alcohol wash. This is then compared with a sample taken at the end of the selection period.

Comparisons with control stock showed that Russian stock has lower proportions of infested brood, fewer brood cells infested with multiple mites, and a higher proportion of damaged mites on bottom boards. All the control stock died.

American foulbrood, chalkbrood and sacbrood are uncommon in the Russian stock, and they are resistant to small hive beetle and potentially to Deformed Wing Virus.

The stock was released to industry management starting in 2000, with the Russian Honey Bee Breeders Association established in 2007. Honey production is considered indicative of colony health, but mite population growth is given double weighting in selection.

Each line is held by at least two members, to ensure that lines are not lost. Queens are exchanged between members so that they can be evaluated and as sources for drones. Members must operate at least 200 colonies, only of Russian stock, and be certified annually. Genetic testing is used to ensure that the stock remains pure.

Podcast: It’s all about the Russians (Russian honey bees, that is) –  Dan Conlon, President of the Russian Honey Bee Breeders Association

SmartBees (Europe) and several programs in Canada consider this trait. It’s time effective and it works.